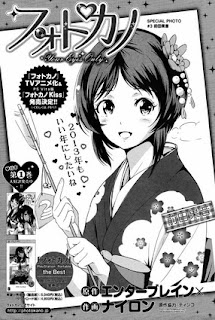 I have to warn you though that this entry will include plot spoiler from the original game, so don't tell me I didn't warn you.

I'm not sure the timeline of this story, whether it happens before or after the climax scene of Kanon route. The sure thing is, it doesn't take time during the summer as the original game took place since all characters are wearing the normal uniform, not the summer one. Probably to promote the upcoming Photo Kano Kiss game where the characters also wear the long-sleeved uniform.

Anyway, the chapter starts with Kanon showing Mai her photo album which all the photos taken by Maeda. Kanon tells Mai that Maeda is now replacing their father, taking Kanon's pictures when he can after he got the camera from their father. Maeda, on school's hall is sneezing, thinking somebody's talking behind his back. Aki makes an appearance, telling Maeda to keep his manner when sneezing in public place.

On his way home, that Maeda's sneezing again, this time he thinks he gets flu. When he finally gets home, Kanon, fully dressed up, running to him, asking Maeda to come to nearby park to take picture of her, because there will be idol audition's coming up and Kanon wants to use picture taken by Maeda for her resume. Maeda agrees to help Kanon produces her. 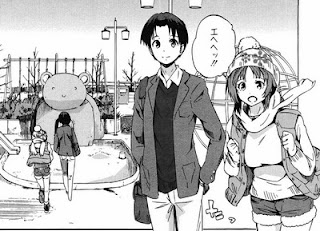 Arrived at the park, the sky doesn't look too well but they continue the photo session. Kanon comments that it's been a long time since both she and Maeda go to the park together. During the photo session, Kanon is impressed that Maeda is taking things seriously with the whole photo session to make her picture looks great, she thinks her brother is very cool. Maeda still not sure about the photo result but Kanon thinks the picture looks great as she thinks Maeda already become better photographer than their dad. Maeda then reminds that their father only took picture of Kanon, even on their childhood photo album, there were barely Maeda's pictures.

Kanon gets flustered (I'm not sure if I read it wrong, it's just Kanon suddenly gets red when Maeda's thinking their dad hardly took his pictures when he was kid), Maeda then checks if Kanon's alright by touching her forehead with his, Kanon gets more flustered. Rain starts coming down and Kanon's starting to sneeze so Maeda puts his jacket on Kanon, grabbing her hand and run home.

At their home, Maeda tells Kanon for her to take bath first to warm her body. On the bath room, Kanon's asking Maeda who waits for his turn outside about earlier, if Maeda bothered with the lack of his childhood pictures. Maeda said that he doesn't really bothered by it, because even if he can't preserve his childhood memory on the photos, but at the very least he can preserve the present memory he has with Kanon by taking her pictures. Kanon smiles and thanks Maeda, but then she hears Maeda's sneezing and freezing out there, so Kanon asks her if Maeda wants to get in the bath together. Maeda gets flustered and decline, saying they already grown up now and can't get in the bath together like they used to. Kanon then says she doesn't bothered, she opens the bath room door and gets out naked, crouching and asks Maeda to get in together again. 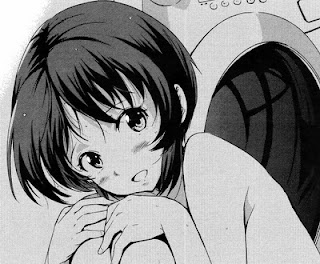 We didn't get to know what happen in the bath, since it was skipped (booo XD). Maeda and Kanon now on living room, waiting for their parent to come home. Kanon is happily enjoy that alone time with Maeda, hugging and leaning to Maeda's arm. Kanon then tells Maeda that she likes him, making Maeda's face turns red. Not stopping, Kanon then closing his eyes and asks Maeda to kiss him. Maeda then kiss her on the forehead, saying that he doesn't want Kanon to gets his flu, Kanon says that she doesn't really bothered getting one. 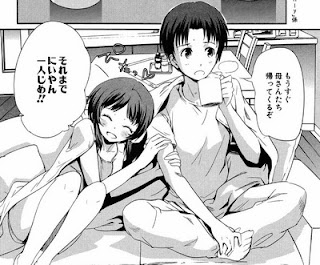 Having played the original game and cleared her route, I like Kanon quite much. She's cute and her teasing is adorable, so this chapter is an enjoyable ride even though it doesn't really tell when is this happen.

If you wonder what about this sibling's relationship though, highlight the texts below since it contains major spoiler:
As you can probably guess, Maeda and Kanon aren't related by blood. Maeda's father and Kanon's mother remarried so they became a sibling when Maeda and Kanon were a kid. This revelation on the original game is discovered exclusively on Kanon route. Both of them know about it the whole time, though Maeda doesn't know Kanon remembers until later. Though Kanon clings to Maeda a lot through out the game, she never gets so bold asking for kiss like on this chapter ^^
by: bakAnki