Good morning guys! Rather than figure review this time, I want to write more about Photo Kano. After the game review and character summary, this time I want to write about the many manga adaptations of this series. Yes, just like Amagami, Photo Kano has been adapted into manga, though unfortunately for us who can't really read Japanese, only small numbers of it translated. But anyway, keep read on to all Photo Kano manga titles available up to now =3 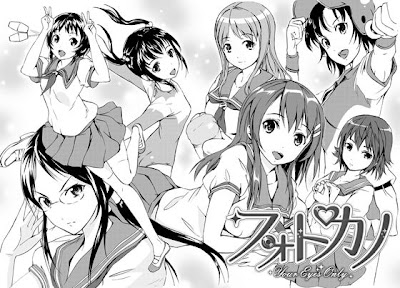 Photo Kano Sweet Snap
This title is the first Photo Kano manga adaptation, taking Niimi Haruka's story L route. The manga is translated by Pretty Anon and up-to-date with the recent monthly Dengeki Maoh magazine release. The first volume of the tankoubon has been released on August 24th 2012 and consist of the first 7 chapters; and since the latest chapter (chapter 11) is reaching the end, probably this manga will end in about 2-3 more chapters. From what I see on the comment on Batoto though, many dropped this manga because the MC is too wimp, can't blame them since he does look like it until late part of Haruka route. It's also fun when they think this one will involves NTR because Yuzuki N' is the author XD


Photo Kano Your Eyes Only
The second manga adaptation is taking the story H route because MC here is choosing to join Photography Club instead. There's more than one focused girl here as Muroto Aki, the strict seito kaicho, and Sakura Mai, the gymnastic kouhai, are the two most focused girl and there's also chapters focusing on Haruka and one chapter to introduce Misaki Nonoka. In the beginning the focused girl is rotating each chapter but starting chapter 7, Aki is the focused girl for 5 chapters until Mai's back to the focused girl on chapter 12. Serialized on bi-weekly Young Animal magazine, right now 12 chapters have been released and the first 4 chapters have been translated by PROzess.


Photo Kano Your Eyes Only (SP)
I don't know the exact title for this one. It's kinda sister-manga of Your Eyes Only because it shares same title (and thus same background with MC joins Photography Club), but from what I know it's on omnibus format. The first girl is Yunoki Rina, the 'gakuen no yome'. When the first chapter came out, I thought it's only a one-shot and the next one will change to the other girl, but I was wrong since recently chapter 2 was out and it's still Rina as the focused girl and the story does continue faithfully to the original PSP game. The first chapter is translated by roankun because I requested to him, but he plead to not do more. This one is released once per 3 months man, c'mon, pretty please? XDD #smacked


Photo Kano Memorial Pictures
This one, like the cover above suggested, focusing on the last two hidden heroines available on original game, Ootani Momoko, the intern teacher, and Kanon, the MC's little sister. I don't know how far the manga is now currently as I haven't found any magazine RAW and nobody's translating it. The first chapter though, is available to read online on Comic Earth Star official page, and the first tankoubon has recently been released on Oct 12th 2012.


Photo Kano Love Album
On early June, there's information on the Photo Kano official site that there would be 3 more mangas to be released, one of those is this one, Love Album. As the title suggests, this one take story L route and the focused heroine is Sanehara Hikari, cynical kouhai on Photo Club who never taken picture of people. No one's translating it but all of the chapters are available to read online on the official page on Famitsu.com. So far read it, there's quite number of change though fundamentally it still the same as the original PSP game.


Photo Kano Happy Album
Another one of three manga adaptations I mentioned above, and yes it's another manga focused on Sanehara Hikari though as the title says this one is taking her story H route. Can't say anything further since I've never read the RAW or find someone's translating it. The only thing worth mentioned is two sample pictures I found on Famitsu.com here.


Photo Kano Dengeki Comic Anthology
Now this one is an anthology comic, collection of one-shot chapters with different artist doing it. You can see some sample pictures on Dengeki.com, and 6 chapters are also available on Dengeki Maoh April and May edition and have been translated by Pretty Anon, link above on Sweet Snap part.


Majikyuu 4koma Photo Kano
Just like the title suggested, it's a collection of 4komas with different artist doing it. Haven't found the RAW so can't say nothing more. I found two sample images though: here and here.


Photo Kano Omnibus Album
The last manga is another anthology. As I haven't found the RAW too, I can't say anything other than give you the image link for variant cover(?!) here, and two sample pages here and here.


Photo Kano Pentaprism Memories
Well, this one is not a manga though, but a light novel. Since I never found any RAW of these too I can't tell what's happen on it or who's the focused heroine (and even if I found it, it's a light novel, lot of texts on it, I can't read it XD).


Photo Kano Visual Works
And the last one, though it's not a manga neither, haha. I think it's worth mention here since from the sample content, it covers many interesting materials for fan. I really want to get this but my money usually goes to action figure, so... ^^; Oh well, if local Kinokuniya have this while I still have extra cash, I'd definitely buy it =3

Okay then, that's all Photo Kano for you today, hope you enjoy this...... What should I call this? Summary? Guide? Oh whatever, I'm happy if I can spread Photo Kano love, hopefully someone's interested and translate the manga (oh crap, I revealed my hidden agenda XD) and more importantly, I really hope Photo Kano will be adapted into anime like Amagami >,<
by: bakAnki