credit to: Paman Aldrinyan :3
Read more »
by: bakAnki No comments: 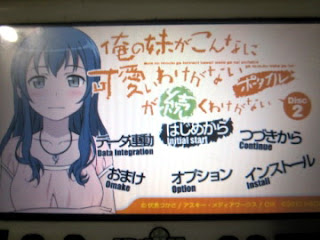 This is the summary for Makishima Saori route from the 'Ore no Imouto ga Konna ni Kawaii Wake ga Nai Portable ga Tsudzuku Wake ga Nai" PSP game. Read at your own risk because it contains spoilers. And please take into consideration that this is only a fan translation, I'm not really fluent on both Japanese or English :3

On this route, we also meet a character those who read the light novel should have known already. It was Makishima Kaori, Saori's older sister. And regarding the light novel, since Saori route here is also written by Fushimi Tsukasa himself, there are part of the story that referencing a story from the light novel, to be exact the volume 6 of the light novel. Seanver has written the summary of it on his Wordpress blog so you should read it if you want to know more. Okay, enough of (long) introduction, enjoy the summary guys!
Read more »
by: bakAnki 14 comments:

After 1/12 scale figure for the recent reviews I did, today I'll present you a super-deformed figure of the main heroine of the popular Accel World series, Kuroyukihime, on a Nendoroid figure line!!

Yaaa, finally the last SHFiguarts of the last member of Akibaranger, Akiba Yellow is ready to be reviewed. She actually shipped at the same time with previously reviewed Akiba Blue by the way, because their release date was only separated within 2 weeks. Well, the faster the group completes the better for us. Here the review~

Akiba Blue? Really? She's been released more than 2 months already now but you just do her review now? Err... Yeah, add how 'fast' shipment to Indonesia, my current condition which can only do photo session on weekend, and my laziness to write, you can consider 2 months fast XD So if you haven't read any Akiba Blue reviews out there for whatever reason, or just want to see more pictures of her, here's my photo review of Akiba Blue~!

Good evening guys! Tonight, I'm not posting a review, but a photo gallery instead. I've posted these on my Tumblr, dividing it by several parts, so consider this entry as the full gallery. And I know I haven't written review of SHFiguarts Akiba Blue and Akiba Yellow yet, but rest assure because I'll write it soon (well, you guys must have been received your figure by now, anyway XD).

So well, without further BS, here are those pictures =D 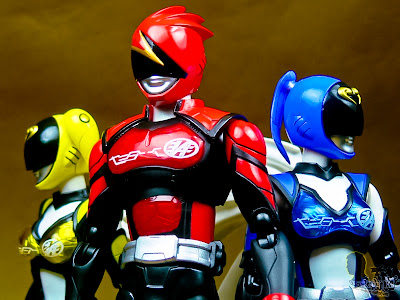