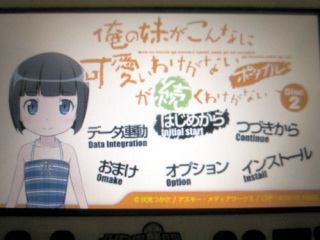 This is the summary for the other Gokou sibling, the little sisters of Kuroneko, Gokou Hinata and Gokou Tamaki from the 'Ore no Imouto ga Konna ni Kawaii Wake ga Nai Portable ga Tsudzuku Wake ga Nai" PSP game. Read at your own risk because it contains spoilers. And do note this is only a fan translation, my Japanese is still sucks and my English writing skill isn't any better :3.

This route can be considered as secret route, since you have to beat another route first before unlocking this route. I never noticed before but apparently Hinata is also voiced by Hanazawa Kana like Kuroneko; Has Hinata appeared on the anime, I forgot. Anyway, on to the summary!!

To be able to get to this route, you have to go to Kanako route first to get the ‘Lolicon’ ORE Item. After you get it, start the game from the beginning and answer Kiririn and Kuronyan question that you have played the first game and you have a girlfriend already, but when they ask you whether you girlfriend is on middle school or high school don’t pick neither, just get through with it. Then the ‘Lolicon’ ORE Item will appear so you can choose it. 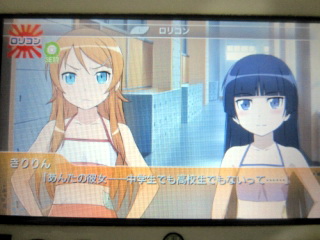 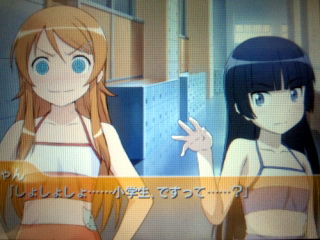 It was summer holiday. Kyousuke then wakes up on his room.
“Fuaaah….. I feel like I was having some amazing dream. Well then, I wonder what should I do today.”
Kyousuke then goes to living room. There, Kirino is waiting for him.
“Ah, you’ve finally woken up!”
“Uooh. W-what is it?”
“I have important thing to talk to you. Sit.”
“What? Don’t tell me you’re going to ask me to buy eroge for you again?”
“That’s not it. You… You have gone to that black girl’s house, haven’t you?”
“Hm, ah yeah, I have.”
“…. Disgusting. Don’t tell me you’re trying to get close to her?”
“I’m not, geez. It was only for our club activity.”
“I wonder.”
“I’m serious. I swear to you. I don’t have that kind of relationship with Kuroneko.”
“Fuu~n. Well then it’s okay.”
“And why do you always have to check up on me like that?”
“H-HAAAA?!!! I-I was only wondering if you’re bothering my friend, i-it worries me.”
“Fine fine, I understand. So that’s the important thing you want to ask me?”
“No. The real question is…. Since you…. Since you have visited that black girl’s house, so…. How is it?”
“Wh-what’s “it”?”
“I-I’m talking about……. Little sister.”
“Little sister?”
“THAT BLACK GIRL’S LITTLE SISTERS!!”
“--- Aaah (I see. I understand all of it. This stupid girl here who really into “imouto moe” is interested with Kuroneko’s little sisters.). Well they’re cute.”
“SERIOUSLY!?”
“Y-yeah… Their name are Hinata-chan and Tamaki-chan. Both of them are good gi--- Ki-Kirino?”
“So it’s Hina-chan and Tama-chan? *slurp*”
“She’s seriously beyond help.”
“…. I’ll go.”
“Pardon me?”
“I’ll go to that black girl’s house too!”
“Well, just go then?”
“Don’t say it like it’s easy job for me!”
“… You can just ask Kuroneko you want to play to her house.”
“It’s impossible. Somehow she never allowed me to come to her house and introduce me to her little sisters. That’s why, bring me along with you and we’ll go to her house.”
“Geez.”
“I want to meet Hina-chan and Tama-chan too!”
“But you see…”
“Please, I’m begging you! I want to, I have to meet them whatever it takes!”
“So rare to see you like this.”
“This is my once-in-lifetime request! I will listen to whatever Onii-sama says!”
“I GET IT! I GET IT, SO JUST STOP THAT CREEPY ACT IMMEDIATELY!”
“IT’S FINE!? SERIOUSLY!?”
“*sigh* ….Can’t be helped.” 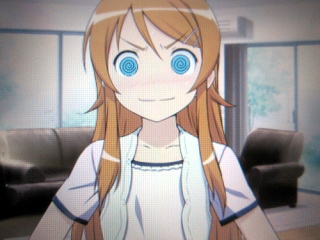 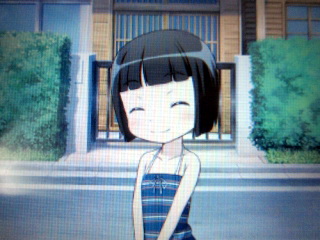 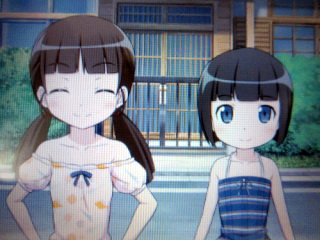 Looking at Kirino makes scary expression after Hinata greeted Kirino, Tamaki goes away looking for a cover.
Ki: “What did you just call me, you br—“
Ky: “Hey, stop. Calm down for awhile.”
Ki: “B-but this brat here is…”
Ky: “It’s must be Kuroneko’s doing, isn’t it?”
Ki: “M-muuu…. B-but!”
Ky: “It must be! Look! Look at these sparkling, innocent eyes!”
Hi: “Kirakiraaa~☆“
Ki: “Ah, this brat is definitely making fun of me!”
Ky: “Calm down, calm down, calm down! (Aah, so Kirino still hates an annoying brat even if the girl is a little sister.) Just let us hear her explanation first.”
Ki: “G-Grrrrrrrr……….”
Ky: “Oi Hinata-chan, why do you call her ‘bitch’?”
Hi: “Eh? Because ‘bitch’ means [cool girl], right?”
Ky: “Who told you that?”
Hi: “Ruri-nee.”
Ky: “All the mysteries have been solved.”
Ki: “Uuuuu….. Damn it, that jyagikan chuunibyou girl!!” 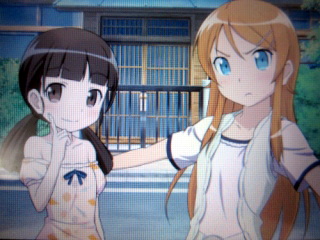 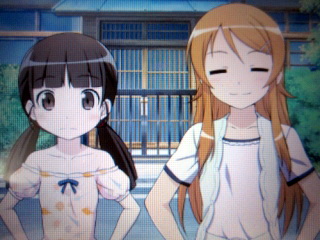 After that chaotic introduction, Kuroneko hasn’t arrived yet.
Ky: “Well, since Kuroneko isn’t home, I guess we will take our leave then.”
Ta: “*staring at Kyousuke*”
Hi: “Ahahaha, looks like Tamaki wants you to come inside.”
Ky: “Is it okay?”
Hi: “Sure, sure. It’s only the two of us right now, anyway.”
Ky: “You guys are really defenseless.”
Ki: “Kuhihihi… Lucky~” 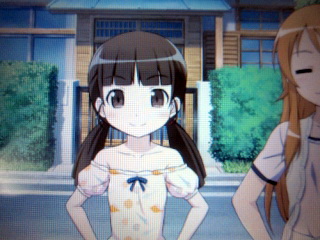 Kyousuke and Kirino then come inside to Gokou house.
Ki: “Hee, so this is her house. Somehow it’s relaxing here.”
Ky: “It’s kinda feel like Manami’s house, isn’t it?”
Ky: “You’re noisy… Ah, hey hey Tama-chan. Come here♪ I'll hug you♥”
Ta: “...uuu”
Ki: “Don’t be like that *slurp*♪ Come heeee~re♥“
Ky: “(She won’t be convinced if you call her disgustingly like that. Ah look, now she looks at you just like she’s seeing a cockroach.)”
Ta: “…..uuu” 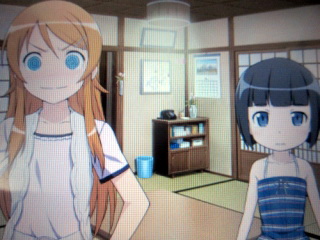 Tamaki then runs away from Kirino and hops on Kyousuke instead.
Ta: “Ehehe.”
Ky: “(Oh crap. This little sister is so cuuu~te.)”
Ki: “---khuuuuuuuuu---“
Ky: “(Oh crap. That little sister is so scary)”
Hi: “Kiri-nee, Kiri-nee!”
Ki: “Hm? What is it?”
Hi: “Do you want to see what Ruri-nee’s room looks?”
Ki: “Ah! Fuhihihi…. Hina-chan, you thought of something interesting.”
Hi: “Hihihi, Kiri-nee knows the stuff too.”
Ky: “(Those two, they just met but already getting along) Both of you stop it, that’s a bad habit.”
Hi: “Kousaka-kun, you’re so boring.”
Ki: “Yeah, yeah. Just shut up, I won’t let interesting chance like this slips away.”
Ky: “…. You guys really are perfectly matched little sisters combi who never listened to what people said.”
Hi: “Inside Ruri-nee’s room, there is Kiri-nee’s picture, you know?”
Ki: “Seriously? I really want to see it.”
Hi: “And then, and then…”
Ki: “Let’s go, let’s go. Before she comes home.”
Hi: “Well then, Kousaka-kun, now it’s been settled, please take care of Tama-chan.”
Hinata and Kirino left Kyousuke alone with Tamaki and went to Kuroneko's room. 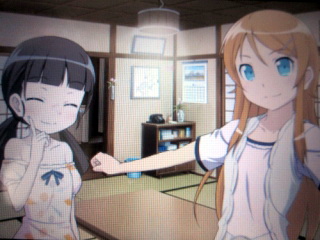 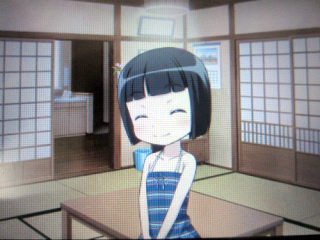 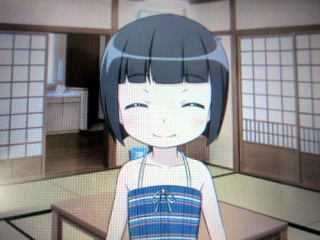 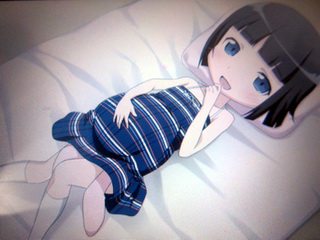 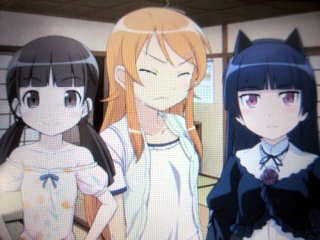 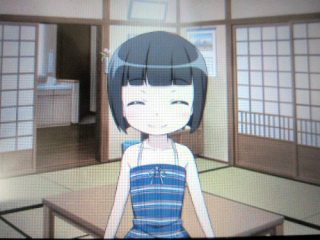