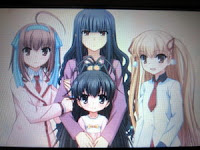 This is the summary from PapaKiki PSP game of Takanashi Miu route. Be warned for spoiler, and this is only a fan summary as I'm not really fluent in both Japanese and English, pardon for some mistakes here and there.

The next night after Parents Day at Hina's kindergarten, from the apartment Miu sees Yuuta on the outside so she comes to him.
"What are you doing here ojii-san? Ojii-san looks melancholy"
"I am? Hahaha, well that's seems to be true"
"Am I..... bothering you here?"
"No you're not. I like talking with Miu-chan, it's always fun"
"Ahaha, I always like to talk with ojii-san too"
"By they way, don't you feel cold wearing pajama like that here?"
"We-well I was about going to bed but I saw you, that's why I came here wearing only pajama"
"I know, but I just wonder if you're cold"
"*sneeze*"
"Ah see. Let's go, it's time to come back inside"
"Please wait. I want to be here just for a little longer"
"You'll catch cold, it's not good"
"The~n, it'll be alright if I do this"
Miu then comes closer to Yuuta and hugs him. "Can we be like this for just a little longer?"
Yuuta recognize that these times Miu always try her best to act normally holding her feeling about the hardship she has been through, "Yes sure" 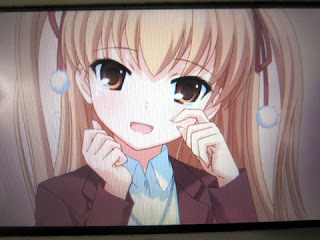 One night after Yuuta comes back from his part-time job, he sees Miu's standing in front of the apartment, alone, with no sign of her usual smile on her face. But as Yuuta calls her and Miu realized Yuuta comes home she smiles at him.

"Is there anything wrong?"
"No, everything is alright"
"But Miu-chan is always try his best, but sometime even I know you can be.... You know Miu-chan, I may not be that reliable but I still want to listen to your problem and help you. We are family, right?"
"Well......... I just....... Feels scared. We are going back to Ikebukuro soon"
"Eh?"
"On that house we have many wonderful memories of father and Yuri-san. I wonder.... If I'll be alright. But, I am Hina's big sister, right? I have to be stronger for her. I don't want to bother onee-chan too because if she know I'm like this..."
"You know Miu-chan. I'm sure when we're going back to Ikebukuro you will keep remember the time Shingo-san and big sister was there. But this time I'll be there. Even though big brother and big sister aren't there anymore, I will always be there. I will be there and protect every one of you. Sora-chan, Hina, and of course Miu-chan."
"Ojii-san..."
"Miu-chan is always try too hard. You can depend more on me as your papa"
"*sob* Fufu, ojii-san as papa? That sounds wonderful."
Tears are starting to fall from Miu's eyes. It is the first time Yuuta sees Miu cries.
"Eh? No way... This is, it's... You know... I, I'm not crying. Th-this is tear of joy. Errr.... *sob* I-I wonder what's happen with me. Ojii-san, I-I'm embarrassed"
"Let me say it again, you can depend on me more. I won't ever let Miu-chan go away. Miu-chan can't always hide your crying face, right?"
"*sob* I just went sentimental for a second. I'll be okay tomorrow, hehe"
"I know. Miu-chan is the sun of Takanashi family, after all. With your radiant smile, you always supporting us every single time. Thank you, Miu-chan"
"Being told that from a person I can depend on, I feel like I'm stronger now. But still, it feels embarrassed to be seen crying like this"
"It's okay. It will be my and Miu-chan secret"
"Hmmm.... But then it will be only me who have a secret? That's why I think it will be fair if both of us have each other secret. So, this will be ojii-san's secret"
Miu then kisses Yuuta.
"Wha-- Mi-mi-mi-mi-mi-Miu-chan?!"
"It's our secret. Don't tell anyone, okay?" 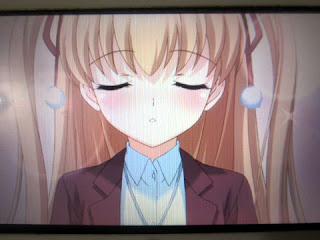 8 years has passed after that day.
It's now the wedding day of Yuuta and Miu.
"Ojii-san, you looks wonderful in that tuxedo"
While Yuuta at lost of words to see his bride. 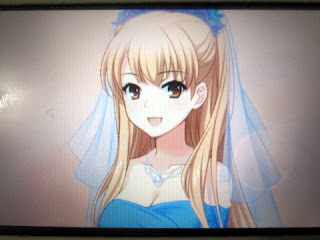 On the room, there's also Sora with them.
S: "Uuugh, since the opponent is Miu, even though it's little bit depressing but I have to admit it"
Yuuta, as dense as ever, doesn't really get what Sora means by that. He thinks Sora is feeling bit down because she hasn't seen Yuuta as dependable man.
Y: "Err, Sora-chan. I will do my best to make Miu-chan happy"
S: "Geez. Onii-chan, you still don't get it until the end. But since I believe you can make Miu happy, I forgive you"
Y: "Thank you, Sora-chan"
M: "Thank you, onee-chan"
S: "A~ah, I lost"
The bell then has rung.
Y: "Oh, it's already the time"
S: "I need to find Hina, since she is the ring girl. Oh, I also have to find Sasha-san, since she will escort Miu on the virgin road"
M: "I wonder if mama has finished her make-up"
S: "Leave it to me, I'll go find them both. See you at the chapel, onii-chan, Miu" 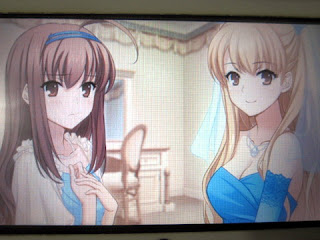 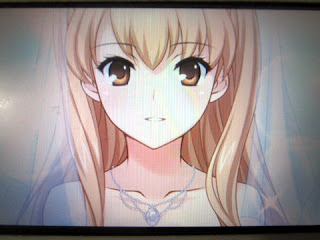 As they start to kiss, the memory of 8 years ago of their first kiss crossed on Yuuta's mind.
"Hm? What is it, Yuuta-san?"
"Just now... I remember our first kiss 8 years ago"
"Ah. I wonder if I had already fallen for Yuuta-san when I was that young"
Yuuta then start wonder himself if he was jealous of Nimura that time because he already likes Miu as a girl.
"No way, no way. That couldn't be it. I looked Miu-chan as my daughter back then, I was her papa!" 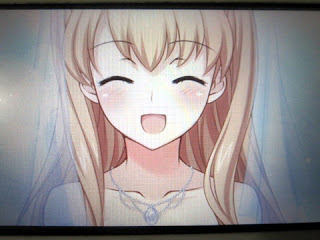 "Fu fu. You're not my papa anymore, Yuuta-san♥""Haha, you're right. But up until now, and from now on, we are loving family" 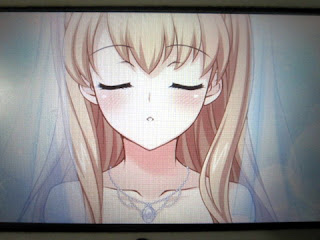 Note (HEAVY SPOILER!!):
That 'Sasha' in the epilogue Sora talked about, if you haven't known yet, is Miu biological mother. She is Russian. Actually Miu is not Shingo's daughter as Sasha's boyfriend left her when he know Sasha was pregnant so Shingo marry Sasha to help her. After Miu was born, Sasha had to went back to Russia because her family is sick (due to war, or something) so she divorced with Shingo so Shingo can get custody to raise Miu. Sasha even introduced Shingo to her friend, Yuri, and pushed them to be a couple which later become his new wife. So it makes Miu as the only daughter not related by blood with anyone. Sasha came back to Japan by the way, to see if Yuuta has what it takes to become Miu and the girls's guardian. Spoiler ends.
by: bakAnki