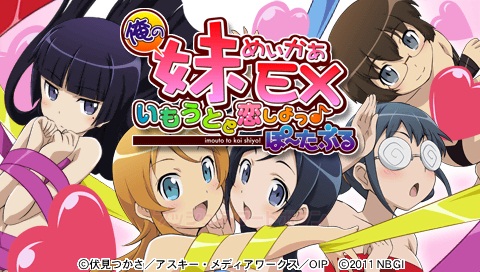 Prologue
The story begins on the first day of summer break on Kousaka Kyousuke’s room. But even though it’s holiday, Kyousuke wakes up early because he is having hard time to sleep, and the reason is because there are 5 unknown girls on his bed!

The (un)familiar girls are Kirino, Ayase, Saori, Kuroneko, and Manami. On this game though, Kyousuke didn’t know who they are, including Kirino. These girls introduce themselves as Kyousuke’s new stepsisters. I don’t really understand the reason behind because either I can’t get the full grasp of their dialogues or this prologue is made half-ass to justify the girls’s status. At one point Saori and Kuroneko said that all of them wished to be Kyousuke’s little sister, because Kyousuke is the Imouto Professional, lol. Kyousuke of course doesn’t understand because he doesn’t have any little sister, but Manami said, breaking the fourth wall, that the setting on this game is made like that.

Kyousuke and the girls attitude toward each other is still the same though. Like Kyousuke already think Ayase is the cutest, Kirino still too tsun to Kyousuke, etc. Oh by the way they call Kyousuke with big brother call. Kirino uses the usual 'Aniki', Ayase also uses her usual 'Onii-san', Kuroneko uses 'Nii-san', Saori uses the polite 'Onii-sama', and Manami calls him 'Onii-chan'.

Even though he doesn’t really against the idea to be these cute girls’s big brother but he is concerned about his parents, and so the girls give him a letter written by Kyousuke’s father and mother saying that they are taking long break for the holiday taking overseas trip and they also tell Kyousuke to take care of the girls. Thus, Kyousuke fully accept the responsibility, because he is thinking he could change the girls to be his ideal little sister, lol. 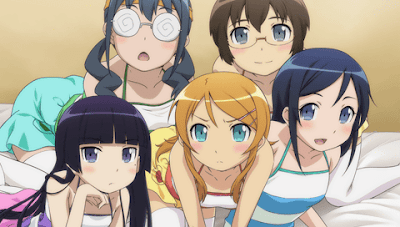 Lesson 1
Kyousuke is called by Ayase to the girls's room.

“Do you need something, Ayase?”
“Onii-san. Right now, I’m choosing which clothes I'm going to wear for my next job.”
“Job? Even though you’re still on middle school?”
“I’m doing modeling job. Of course, I have asked permission from school. Because last month I got more vote on readers popularity polling and ranked up, I will be special featured on this month edition.”
“Hee, model, huh? As expected from Ayase!”
“You don’t seem to be surprised. Besides, I’m still nothing compared to Kirino.”
“That’s not true! The cuteness of my angel Ayase-tan will surely exceeds all.”
“Fuu—n…”
“W-why are you staring me like that?”
“Nothing…… I thought he will be more surprised. Too bad.”
“…. Hm, did you just say something?”
“I-I didn’t say anything.”

Ayase becomes embarrassed and excuse herself out.

“I have to talk to Kirino about something, so I’m going! Bye!”
“... What’s happening?... But, if my little sister becomes a model, that wouldn’t be bad at all, right? Hehee.” 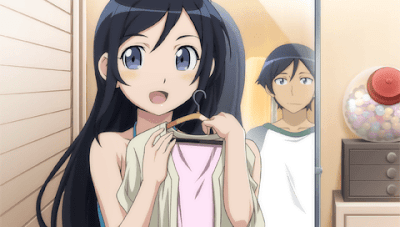 Lesson 2
One day at the living room, Ayase is looking confused. Kyousuke then comes to see her.

“Uuumm... I wonder which one he likes…”
“Are you picking clothes for your job again?”
“Ah, Onii-san! Y-you can’t look at this!”
“He…? Ah, aaah, is it because you’re going to wear clothes for a magazine, so it has to be kept secret from people outside?”
“T-that’s right!”

Ayase then goes to Kirino.

Ky: “Having a model little sister has its difficulty too, huh…”

Kyousuke then sees the page that has article about Ayase.

Ayase then excuse herself.

“(In other words, “I still don’t trust Onii-san yet”, right?)… Well I guess she can’t immediately acknowledge me as her brother.” 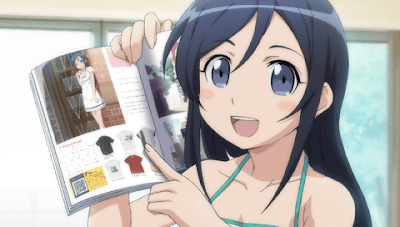 Lesson 4
Ayase is in Kirino’s room, trying to ask for Kirino’s help. Kyousuke is happen to be around and hear their conversation.

Hearing Ayase’s decision, Kyousuke is now having complicated feeling knowing one of her little sister will doing swimsuit photo session.

Lesson 5
After thinking about it, one day Kyousuke calls Ayase to speak with her.

“Ayase, can I… Talk to you for awhile?”
“What is it?”
“Err… You’re going to do swimsuit photo session, aren’t you? Can I ask you… Not to do that?”
“... Why?”
“I can’t really put it in good words, it’s kinda complicated. When I think that stranger can see my own little sister in swimsuit--- I'm against it.”
“Haa? So just because Onii-san against the idea, then I have to abandon my job?”
“To put it bluntly, yeah.”
“That is ridiculous.”
“The final call is still yours to make, I don’t have any intention to force you my selfishness. But, I’ll be grateful if you can think about it one more time.”
“……….. Haah. Having job as a model is one thing I’m proud of. And anyway, even though it’s swimsuit photo session, but it’s for girl magazine so I won’t have to worry about indecency.”
“Then what about the cameraman? The man in charge of the magazine? The other staffs of the magazine?”
“That’s…”
“You can’t just naively say “It’s going to be completely fine”, Ayase. But again, it’s not that I want to stand in the way of the thing you want to do.”
“… Onii-san is really being ridiculous.”
“Yeah… I’m worried because you’re my little sister, but I also want you to do the things you like. A big brother is, an existence that more selfish than the little sister.”
“…………. Haah, I understand. But, I'll only think about it, okay.”
“Yeah. That’s enough for me.”

Kyousuke then hesitantly reads the magazine. But until the last page he doesn’t see any picture of Ayase. 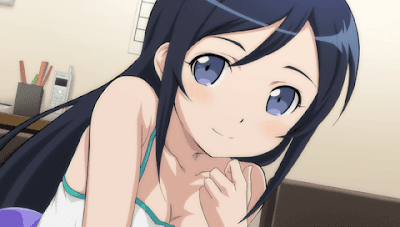 “Is it…….. Not good?”
“No, of course not... Heh, you really are the best!”
“Of course I am. Because I’m the little sister of the best big brother who always think the best for my sake.”
“A-Ayase-tan….!!!”
“Ah, but to make up for cancelling my job, in return--- Please take me somewhere nice, okay?”
“S-somewhere nice?”
“Let’s see. Like Guam, or Hawaii, or Saipan! Of course, I’m expecting Onii-san to pay all the expenses. After all, I’m also selfish just like my Onii-san♥”
“Haha, hahahahaha” *monotone laugh*

Finale
In the last day of summer break, when Kyousuke wakes up he couldn't find the girls every where. Even after he calls them one by one, they are not replying back. But then, Kyousuke hears Ayase’s voice from outside his room.

Ayase then enters Kyousuke’s room. She is wearing a beautiful dress.

That's it. Pretty short, eh? Well, what do you expect from bonus game, ahaha. But that last cut-scene is really something, one of my most favorite picture of Ayase♥

Each heroine has three Finale, by the way. Finale 1 as best ending, Finale 2 as good ending, and Finale 3 as bad ending. The good ending is usually the same for everyone where the girl accepts Kyousuke as her big brother and won't leave his side even though no special cut-scene. Finale 3 of Manami actually reveal that the girls are... ordered by Kyousuke's parents so he won't feel lonely on summer holiday while they on vacation, lol. And as you can expect, Ayase's bad end involves her yandere side. In fact, Ayase is the only one who has special cut-scene for the bad end. As I hate yandere, I'm not going to show the picture but you can see it here.

Oh by the way, IIRC the last line Ayase said above is what a bride usually says in engagement (or is it wedding, I forget). I'm going to hit the bed then, good night and until next post =D
by: bakAnki