Premiered on June 30th 2013, Bima Satria Garuda (Bima the Garuda Knight) is Indonesian tokusatsu series created by cooperation of MNC Media and Ishimori Production. According to one of interview by its creator and producer, so far Bima is doing very good with its sold merchandise as well as revenue from ads which as high as shows aired on prime time (Bima airs on Sunday morning). Among the merchandises, which is made by Bandai, one that highly anticipated by adult fans is the action figure since months ago, and few days ago finally the said item is released. Specially for this item, I borrow camera from a relative (Canon EOS-M) just so I can do the usual FiguReview for this figure since my camera is busted and I haven't bought the new one. So, do this figure met the expectation of the fans, read on!

The real identity of Bima is Ray Bramasakti, an orphan who works as mechanic and lives together with his foster families consisting of his uncle, an older brother, and younger sister. During VUDO, invader from another world, first public invasion, Ray helped a mysterious man named Mikhail. From Mikhail, Ray is given a powerful stone, the Red Power Stone which can transforms Ray into Bima the Garuda Knight with strength, agility, and focus much greater than normal person. At first Ray doesn't want to accept his destiny and responsibility as Earth's savior from VUDO because he doesn't want to endanger his foster families he really cares about, but eventually Ray accepts his destiny and even reveals his identity as Bima in front of his family.

Since this is manufactured by Bandai, like most of their action figure's packaging, Bima Action Figure is packed on a box format with window blister on the front side so you can see the content inside. The dominant red color used is the same as other Bima merchandises, as well as the the font used for the item's name on the front. The first "unfortunate thing" you can notice is they listed this item for 4+ years old, meaning this figure is intended for younger fans.

Moving to the sides, we can see the actual Bima suit on action not the figure prototype like most of other Bandai figures. And heck, even on the prototype pictures on the back side of the box, they just put two pictures of the figure stand still, doesn't show dynamic posing, or any posing at all for that matter, just the text that explain we can pose this figure (well duh, it is an action figure) and that Helios can be transformed into Garuda Mode or both single sword. They really should do better job for MPAF line, or Azazel Action Figure if they plan to release one because seriously, even though the box looks simple yet cool, the promotional pictures aren't really do its job to make people want to buy it. On the inside, all the content of the set is stored on a plastic blister like usual Bandai.

Set Content
From this set, you only get the action figure of Bima and Bima's weapon, Helios. No interchangeable hand part, no display stand, and no any other accessories or optional parts. Sad, eh?

At first glance, this version of Bima reminds you of Power Rangers toys because the bulky and muscular body proportion and this proportion is disappointing for me. For one, I thought the figure is just as tall as other 1/12 (or 6") figure, but Bima here is about 7" and as tall as soft vinyl instead, making SHF just like youngsters. And then the head part is also looks out of proportion being too wide, not as sexy and slender like the real suit you can see on the box. The crotch area is also looks horrible with those gaps and fat thighs, plus its back looks worse with all visible bolts here and there. And lastly, since the hand part is fixed, you're stuck with holding-item hand that empty on the center, making it looks really weird on most pose.

But actually the sculpts aren't all bad, I mean look at those details on the helmet, garuda sculpture on forehead, and the whole body that looks great and beautiful. To help you more with scale comparison, here's Bima with some action figures from various lines:

Paint
Fortunately, paint department done great job. Most paints are applied perfectly, even on small details like the Red Power Stone or Helios. There's no messy paint, paint transfer, or any major problems spotted on my figure, so pretty good QC we have here.

And so here we are, on the part where it really falls apart. For me as a toy enthusiast/collector spoiled by SHFiguarts, figma, and other figure lines's good range of articulation all these years, the articulation on Bima is very disappointing, but let's see the existing articulations before I tell you why I hate it. Bima has articulation on its neck, its armor shoulder so it won't limit the shoulder movement, single hinge joint on the elbow, swivel joint on hand, ball-hinge joint on the crotch/thigh, and finally double-hinge on the knee. Yep, that's all it gets, and I tell you now why it's not enough.

First, the "collar" on her armor makes Bima can't face her head right and left completely, you're stuck with tilting head if you force it to face left or right too much. The single hinge joint on the elbow makes its movement not that wide. Notice that it doesn't have torso or hip joint, that isn't as hurt as we don't have swivel movement on the bicep/upper arm because without it, there's so many more pose you can't reenact with this figure. Remember Bima/Ray's quirk to loosen his right wrist? You can't do it with this figure. See the actual Bima costume on the box's sides where it hold Helios (on both mode) with both hands? You can't do it with this figure. Do you want to pose Bima using Helios as a bow for Helios Blaster pose? Welp, you can't do it with this figure.... well, at least with natural look. All because it doesn't have swivel joint on the upper arms. And I'm not even finished yet, Bima here doesn't have ankle joint either so you probably will have hard time to balance your dynamic pose, unless you use display stand, which you have to buy separately. Lastly, the existing joints aren't that solid either. Ball-hinge joint on the crotch is too easy to be moved I'm afraid it will get loose quick though the swivel movement is good you can make Bima sit naturally, but the elbow joint is weak too it can't hold figma's weight on princess carry pose until I adjusted the position (see "Action Pose" segment below for the said pose). So once again, articulations on this figure is terrible, I have some Kamen Rider articulated candy toys and those have much better articulations than this figure *sigh*

Since this figure doesn't really have gimmick by itself, and the only accessory it has is the Helios, let's talk about Helios on this part. Visually, Helios looks great, isn't it? Great detail on the "feathers" as well as nice paint, but wait until you touch it with your own hand. Helios here is completely made from soft plastic material, so it has high risk to bend. If you have gashapon toys, or maybe HDM trading figures/candy toys, with sword or rod weapon, that's what Helios here is made from. Very disappointing. But Helios is transformable between the single sword mode or the naginata-ish Garuda Mode via the garuda thing on the center which has connector on its upper and left-right side. Put one of the Helios handle on the garuda upper side for the single sword mode, or put both Helios on each side for the Garuda Mode which is the default mode on the package. They don't give instruction manual to show you how to properly make Bima hold both form of Helios but it's very easy to figure anyway.

Action Pose
And so here it is, after all the texts above let's see how Bima looks in the action despite all the limitation it has. Pardon with the picture quality as I don't get the gist of the borrowed camera yet 'orz 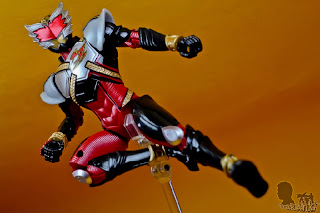 Whenever Bima needs it, Helios will come from the sun instantly to his side! 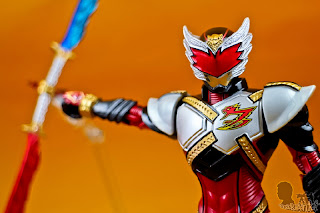 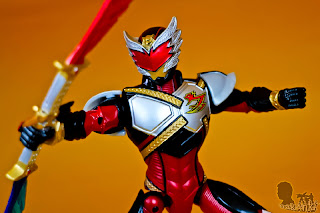 And let's give Bima effect part so he can do all of his finisher: 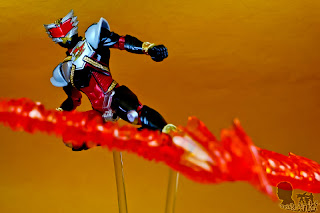 And now, Bima and his love interest.... which is his foster little sister, Rena :v 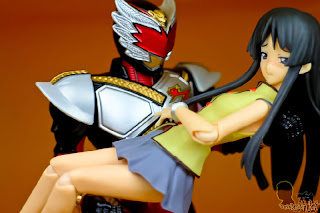 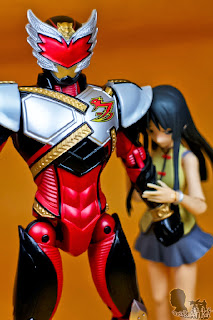 And look who gets a fan from other country, Bima is sure a popular hero... 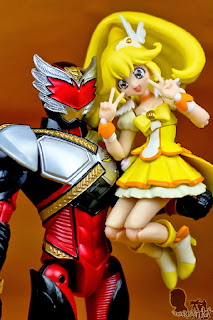 And lastly, I did some more editing with my phone. Even though it's hard to take picture with phone (and the result isn't that nice), but picture editing is so fun there <3 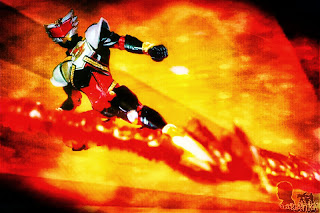 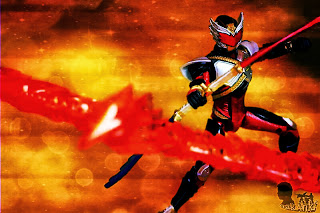 End Verdict
Disappointing. That's one word I have for this figure. Maybe because I, and probably other fans, have high expectation from this figure I ended up very disappointed when I finally get to play with it. Bland promotional pictures on the box, out-of-scale with 1/12 scale figure, terrible articulations, too bulky and ugly crotch area, and cheap material used for Helios are the things you should prepare if you want to buy this. But to be fair, this figure is marketed primarily for younger fans, not adult collector so comparing it to SHFiguarts, figma, or other established figure line isn't fair, but I did hope it will be at least as good as gimmick figure line of Kamen Rider like Wizard Action Please of Kamen Rider Wizard or Armor Change of Kamen Rider Gaim. In the end though, it's still overpriced. For figure with quality like this I was expecting less than 200,000 IDR but heck, even the soft vinyl is already overpriced.

Unfortunately, Bima Action Figure is the only articulated Bima figure released so far. There's MPAF (Multi Poseable Action Figure) line targeted to older fans coming in 2014, but if you're hoping for SHFiguarts release, Tamashii Nations staff said that they won't do Bima in near future. So in the end, the final decision is yours to make. If you can't decide it yet,  just pull the sun into your heart... 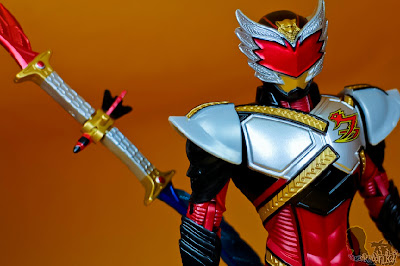