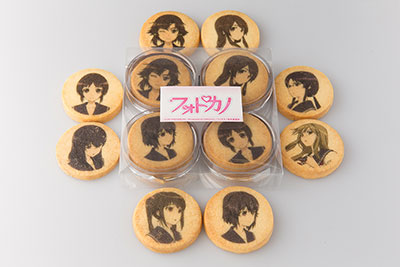 It's been a month since I wrote a post here and now I'm writing Photo Kano-related stuff yet again. How much of Photo Kano fans am I?

As most of people noticed, the anime are rushing stuffs. They combine both story L and story H parts of each heroine arc on one episode, so of course they had to cut many interesting events from the game, especially from the sub events. Thus, on this entry I want to write some interesting events from the game that the anime cut, with the exception of Kanon route's events which I don't know whether the anime going to adapt or not tomorrow.

Take note that my PSP has broken recently, so I write this based on my memory. Check more of my Photo Kano summaries on this post or this post. Enjoy =D 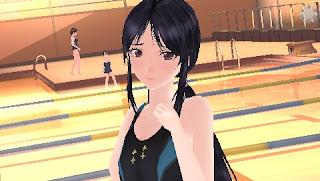 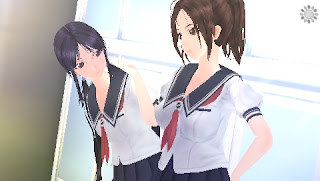 This is from Aki's sub-event. Kazuya is walking on the hall when he's hearing Aki and Katsumi's talking/

This was from Mai's story L sub-event, after their date to theme park. At that date, after Kazuya made Mai gains confidence again, Mai kiss Kazuya in the cheek before they parted, and this event takes place day after that. Kazuya was walking around to find interesting picture object, and when he is on the school cafeteria he meets Mai.

"Mai-chan, what are you doing?"
"Ah, Maeda-senpai. I'm taking a break from club practice. What are you doing here too, senpai?"
"I'm trying interesting object for photography, but I haven't find one."
"Then if you don't mind, do you want to accompany me and talk for awhile senpai?"
"Of course, let's find somewhere to sit then."

After that, they sit on a table outside.

"The sunset today is beautiful as usual, isn't it senpai?"
"Yeah."
"It reminds me of our date to the theme park days ago. Senpai, thank you very much for giving me delightful first date."
"Ah no, it was really fun for me too."
"Will you take me to another date again?"
"Of course."
"Thank you."
"..."

Kazuya then look at Mai's lips, remember the time when she kiss his cheek. Mai then notices.

"U-uhm, senpai? Why are you looking at me? Is there something on my face?"
"Ah, n-no, there isn't anything."
"T-thank God. I thought there's some left over on my cheek, I just had a bread not long ago."
"I see."
"Umm... Then, if there's nothing on my face, why are you looking at me just now?"
"Err....... I-I was remembering the time when Mai-chan kissed me on the cheek, so without realizing I stare at your lips."
"E-EH?"
"A-ah, no. Please forget it. You need to go back to your club practice, aren't you Mai-chan?"
"I wouldn't mind if you want to kiss me properly right now..."
"Hm? What did you just say Mai-chan?"
"A-AH NOTHING!! I have to go back to my club. Senpai, sorry for taking your time, excuse me!"
"Y-yeah, see you around." 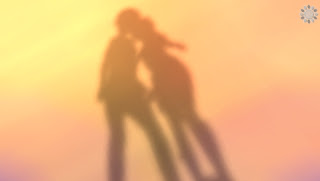 This was from Mai's story L, not from story H the anime mostly cover because on Mai story H she didn't get selected. Kazuya is about to come home and when he comes out of his class, he bumps with Mai whom about to enters his class to find him.

"Ahahaha..... So, were you looking for me just now?"
"Oh yeah, I was wondering if Senpai is still here. Can we go home together? I have something I want to tell you."
"Okay, let's go."

In their way home, on the riverside.

"So, what are you going to tell me about Mai-chan?"
"Ehehe, don't be surprised, okay? I'm chosen as a substitute on the fall competition!!"
"Oh, congratulations Mai-chan!!"
"Thank you, ehehe. I may won't get chance to perform, but this way I can cheer on my team. It's because  Senpai's word that make me realize I should be more confident of myself and find my own beauty. I want to tell Senpai this news first than anyone else."
"Mai-chan... Then, do you want to eat something like parfait? I'll treat you anything as a reward."
"Senpai..."
"Ah, you're on a diet, aren't you. But it will be fine if it's just this one time."
"Senpai, thank you. But I don't think anything. Just being with Senpai like this, it already make me filled with warmth."
"Mai-chan..."
"Ah Senpai, look below. Our shadow is so long!"
"You're right. But Mai-chan's doesn't seems too different with your height."
"Mmuu, in the end you're saying I'm short again. Meanie~"
"Ahahaha..."

She then jumps again, now to Kazuya's side, and hugs him.

After that they kiss, and Kazuya invites Mai to see his picture on the Photo Club showcase on the school festival. Days later after school festival end, Kazuya confesses to Mai. 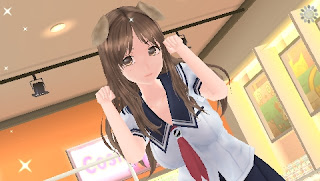 This was from one of Rina's after-school date event, where Kazuya and Rina go to variety shop at shopping mall. Rina is searching for note book and currently sight seeing on Ahogeappi corner while Kazuya is looking at cosplay goods corner.

On the game you can choose a nekomimi, inumimi, or usamimi. I'm going with inumimi on this one. 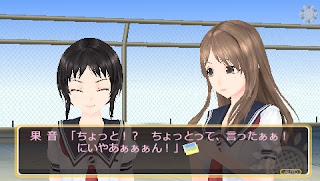 This is originally a sub-event of Yunoki Rina and Kanon. Kazuya goes to the rooftop to eat his lunch and he hears two girls talking not far from where he stands.

Kazuya walks toward the source of the voices. 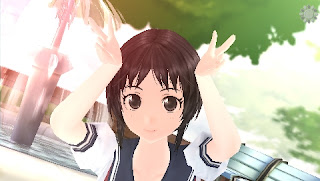 This conversation is not from a main or sub event, but happened when you choose Private segment during the Biorythm Talk at some point.

Kazuya is walking around on the hall when Kanon comes out from home economy class, wearing apron. She's asking for Kazuya's opinion.

"How is it Niiyan, my look wearing this apron? Cute, right? Do I look like a young wife?"
"Sure, sure."
"Aaah, what's with that respond!"
"You too, what are you doing showing off your appeal like that to your own brother?"
"So you want me to show and ask another boy?"
"Umm..."
"Oooh I know! Do you prefer a naked apron look instead?"
"W-what are you saying!? How do you know something like that?"
"Sheesh, it's not a big deal. I know boys like that kind of thing, ehehe." 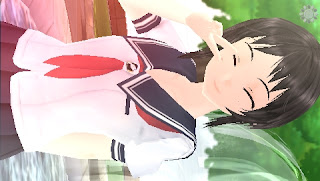 Kazuya is eating a bread he bought for lunch break on the rooftop when Kanon comes.

School has ended, but it's raining. Kazuya meets Kanon on the shoes locker, both of them didn't bring umbrella and since it's already very late and the rain doesn't seem to stop anytime soon, they decide to run through it.

Arriving on the home, since they both drenched, they offered each other to go have bath first. But because neither of them didn't want to go first, Kanon suggested for them to go together like they used to be when they were little. Kazuya was against the idea, but since both of them starting to sneeze he gave up. Kazuya then went first while Kanon was changing outside.

Kanon then comes, but something surprising Kazuya.

Kazuya then stands up suddenly from the bath.

"Ahahaha, so Niiyan was also thinking the same thing. As expected from siblings, we think alike." 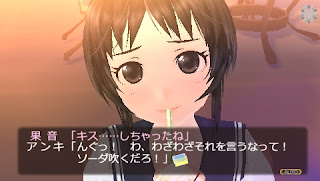 Kanon asks Kazuya to go together to food court on shopping mall after school, saying she'll treat her something. Kanon then comes with only one soda drink, but with two straws. She says that she wants to feel what it's like to drink from the same glass like a couple with Kazuya, and although initially against her sister's embarrassing idea, Kazuya gives up.