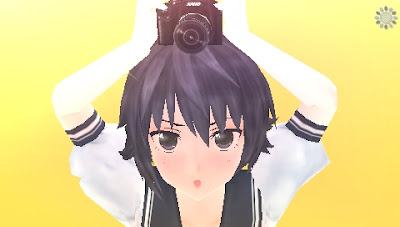 !!!This post contains spoiler of other girl route so read at your own risk!!!

This is the LV6 after-school date event from her story L. The first time accessing this event, Maeda and Sanehara goes to park near Maeda's house (the promised park on Haruka route) to take pictures. But when taking picture, Sanehara's stocking is ripped so Maeda offers her to come to his house to take it off. Kanon isn't home yet.

"Is it okay for you it's just two of us? Isn't it kinda dangerous for girl and boy alone?"
"No problem. Or is senpai plans to do something to me?"
"O-of course not!"
"If senpai tries to do anything strange to me, I could always scream anyway since your house is close to that park."
"Hey you..."

They go to Maeda's room and Maeda goes out until Sanehara finish taking off her stocking. They're talking for awhile, and when moving to take Sanehara's bare legs picture (with her permission), he hurted his back so Sanehara gives him a foot-massage. The second time Sanehara comes to his house, Sanehara curious to check Maeda's collection below the bed.

When he tries to stop Sanehara, Maeda slips and just like before he hurts his back again so Sanehara gives him yet another foot-massage after he says it's partly her fault for startling him. The third time, Sanehara comes to Maeda's house again and just like the two times before, Kanon hasn't arrived yet.

"I wonder why Kanon always late every time I invite you here."
"Haah, I have prepared myself that it comes to this again."
"W-what with that, you make it sound that I purposely did it. I-it's just coincident!"
"Senpai just make it sounds more like a lie."
"Geez..."

They then go to Maeda's room.

Sanehara then starts to massage Maeda again with her feet. 
This is the last event from Sanehara story H. The time Maeda asks Sanehara to visit the Photography Club display on school festival, the last flag before school festival and confession supposed to happen on the game.

Maeda is about to come home when he meets Sanehara in front of his class, so then he asks her to go home together. They talk about the school festival for each club's event, Maeda doesn't know anything about what Photography Club will do (if you don't go to Haruka route, the setting is Maeda doesn't know anything about Miss Photogenic event until very late), as he plans to submit only one picture he likes the most and she wants Sanehara to come see it. Sanehara comments that even if he doesn't invite her, since they are basically holding same event she will come to see, but now she promises to definitely see Maeda's picture. After that Sanehara's phone is ringing, she got text from Uchida informing the food court on shopping plaza has new tasty vanilla ice cream. So then they go to the place to try it.

While eating the ice cream, Maeda asks about Sanehara relationship with Uchida. Sanehara tells that she and Uchida gets along quite well since they have same interest on photography, though they don't always together since Sanehara doesn't like to hang out too much with girls due to her past (on story H, Sanehara never told Maeda about the bullying incident). After that, Sanehara notices something funny on Maeda. "Buh..."
"Hm? What is it?"
"Fufu, Senpai. Your cheek."
"Eh?"
"You have ice cream on your cheek. C'mon, you are not children anymore, fufufu."
"I-I don't want you all of people to tell me that! You're the childish one, easily have ketchup in your cheek whenever you eat burger!"
"That's just because the burger is too big, I'm not childish."
"No, you are."
"Geez, just because I have small mouth you're saying I'm childish. Then how about this..."

Sanehara then suddenly approach Maeda and then licks the cream on his cheek, startling him.

Maeda then eats his ice cream again, but now he purposely left some on his cheek.

"Senpai, why are you eating like that?"
"Sa-Sanehara, can you do it one more time?"
"N-no way. Second time would be too embarrassing."
"Please."
"Instead of childish, now you're just look idiotic."
"Call me whatever you want, just please do it again. Okay?"
"... Haaah. It can't be helped."

Sanehara then licks the ice cream on Maeda's cheek again.