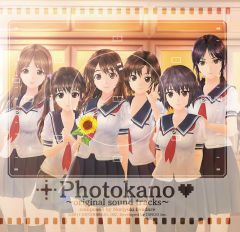 Fulfilling my promise to write more about this love sim game after my first game review of Photo Kano I wrote week ago, here's the characters summary. For me almost all the heroines are lovable and interesting even though for those who have played lots of love sim games (or watched love-comedy animes) might get use to the characterization already. Well anyway, meet the main character and sub characters of Photo Kano!

His name by default is Maeda Kazuya but you can change his name to anything. He is student of Kouga High School class 2-B and not a member of any club, until now. He easily got bored of his previous hobbies before, which includes guitar, billyard, and dart, since he usually tried that to make him look cool in front of girls. On the last summer break, he got a DSLR camera from his father so he brings the camera on the school when the second semester started. The first day he brought the camera he is scouted by Katsumi and Kudou, club leader of Photo Club and Photography Club, respectively. You can choose Maeda to join between the two to decide which type of Story you'll get. Photo Club will get you Story L(ove) and joining Photography Club will make you get Story H(appy).

Student of the same class with the main character. The angel of the school who popular with both of boys and girls because of her good look and kind personality. She is Tennis Club member and currently its ace. She is also the MC's childhood friend but on the middle school they went to different school and on the first grade of High School they were on different class. Along with the gap created by their surrounding, MC and Haruka weren't that close anymore, but Haruka still gets along pretty well with Kanon.

The school's Seito Kaichou (Student Representative Leader) and class 3-A student. A very serious, strict, and the top student of the school who always get high score on tests. She never tolerate anyone who breaks school's rule and don't hesitate to scold those who did even though he/she is a teacher. An ex-member of Swimming Club. She always bothered by her flat chest as she easily gets irritated if someone mention it or talk about breast size.

Kanon's best friend who gets to study in the same class, 1-B, with her. Mai is the new member of Gymnastic Club but already gets popular with boys, she even has "Gymnastic Angel" nickname even though she didn't know about it. Really concern about her small figure that becomes a weak point on gymnastic and also about her weight, so she is currently on strict diet even though she really likes to eat sweets. A pure, innocent, cute kouhai-type.

One of member of Photo Club and student of class 1-C. A quiet and cynical girl who only likes to take picture of environment and never taken picture of people. Since she starts photography earlier than the MC, she has better knowledge of camera so she often teaches MC about photography technique and camera. Other than photography, she also likes astronomy.

Student of class 2-A and also the ace pitcher of the Soft Ball Club. Very energetic, tomboy, and positive girl. She's very close with the MC as they went to the same middle school, to the point of MC calling her on first name basis. She gave MC some nicknames according to hobby he was into, and currently calls him "Dattsun", from when MC was into dart. With her cheerful personality, she easily gets along with almost everyone and has nickname for everyone.

Classmate of Nonoka from class 2-A and close to her too. Even though she is the only member, Aki gave her permission to formed Cooking Club as she really like to cook. Despite good at cooking and baking cake, she is quite clumsy but doesn't want to admit it. Other than "Housewife of the Academy" nickname due to adult aura she has, she also has "Rinappai" nickname given by boys because of her big breast.

MC's classmate who is very shy, always being alone, likes to read, and very quiet. She has inferiority complex thinking she is plain, boring normal girl. The only girl she close to is Haruka. One of secret heroine which her route will be unlocked after you finish the game once.

The little sister who calls MC "Niiyan" and went into the same school with the main character. Assigned on 1-B, classmate with Mai and she is also a member of Tennis Club like Haruka, but she also get along with almost other main heroines. Because she is really close with Mai, the boys call them "MaiKano" duo. Although many told she and MC are not look alike, but both of them are really close and often tease each other. She has a dream to become an idol, and to have big breast like their mother. Although officially placed a sub-character, she has her own route that will be unlocked if you got at least one of previous 7 heroines ending.

Kurabayashi Katsumi (CV: Kaoru Mizuhara)
Club leader of the Photo Club and also a classmate of Aki and Kudou on 3-A. Due to the injury she got, she quit the Volleyball Club. Because Photography Club only took ecchi picture, Katsumi who developed photography as new hobby asked Aki to make 'official' photography club and so she founded Photo Club. Since then she took pictures of many clubs's club activity and usually give input for sport clubs practice.

Member of both Volleyball Club and Photo Club, and student of class 1-C together with Hikari even though they aren't that close. She really likes and adores Katsumi almost in yuri level, she even joins Photo Club since she doesn't want to be left by Katsumi after she quit Volleyball Club. She has a dream to play volleyball in the same field with Katsumi. Ruu has her own story you can access if you visit the club room often and even her own ending if after the 2 months deadline you didn't get one girl with maxed affection.


Nakagawa Itta (CV: Shiraishi Minoru)
Member of Photography Club and student of class 2-A. Sharing the same ideal with Kudou and also great at stealth. Nicknamed "Low Angler Nakagawa" and often aim at girls's panty shot since he is short and act as the club's assault officer. Best friend of Azuma.

He is also a member of Photography Club and classmate of Nakagawa, Nonoka, and Rina on class 2-A. Also good at stealth and share the same ideal as other Photography Club members, and nicknamed "Breast Slipper Azuma" as he is often take picture of girls's breast taking advantage of his height. Act as club's sniper. His talk tone is as creepy as one can gets, and usually call girls with "-tan" honorific.

Uchida Yuuko (CV: Takagaki Ayahi)
The only girl on Photography Club and classmate of Ruu and Hikari on 1-C. Even though a girl, but she likes to take erotic picture of other girls, sharing Kudou's ideal. With her great stealth ability, she is nicknamed "Stealth Uchida" and act as the assassin of the club. She gets along with Hikari really well because their same photography hobby even though they're on different club. She's also an otaku and just like Ruu, she has her own story and ending you can get if you visit the club room often and didn't get any girl with maxed affection by the end of the second month.

Kitagawa Misa (CV: Seto Saori)
Homeroom teacher of class 2-B where MC, Haruka, and Tomoe study, and also the teacher for English. She is quite strict, especially to MC who never been a diligent student in the first place. Also act as guide for Momoko in her internship.


Ootani Momoko (CV: Aya Endo)
College student who become temporary test teacher as her intern and act as the temporary homeroom teacher for 3-A where Aki, Katsumi, and Kudou study. She is a genius from top university and popular with boys and girls because of her looks and "big sister" personality rather than normal teacher. She can't swim, and can't tell cardinal direction. She also really likes chicklit story and youth/teenage romance. Her route will be unlocked after you got Kanon ending. 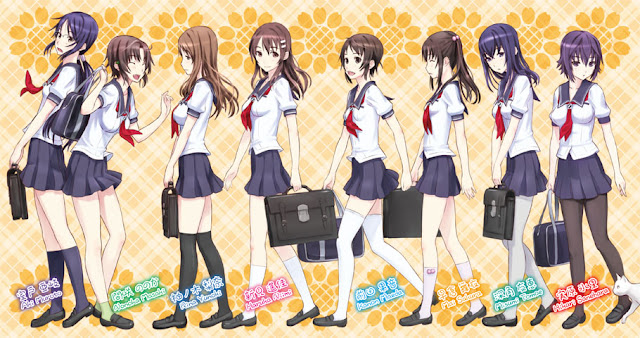 That's all the characters from Photo Kano. If you want to know more of the character, their picture and/or sample voice, you can see Photo Kano official site. To be specific the "main character" and "sub character" section. That's all for now and until next post =D
by: bakAnki