It's already been almost a month after the event and after promise to write an entry to report this event, I lost my will to write and also material to be shared since after second thought, I realized I already wrote most exciting moments about Figmania booth and bless4, lol. But oh well, might write a little more outside of those. 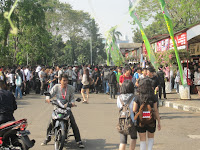 So I came to the first day of Anime Festival Asia Indonesia 2012 (will shorten it as AFAID starting now) with my friend just like the day before when we prepared our Figmania community booth. The preparation wasn't really complete on that day, I for one brought the late three more banners for the booth, as seen on picture above. Lucky for me and my friend who have Exhibitor Pass that grant us free pass to enter the venue without having to get in line, which was already so long when I got there. I arrived late at the location about 8.30 AM-ish by the way, half an hour until the gate is open for public. 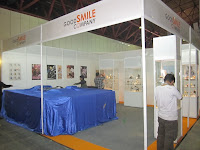 After put my things on the booth, I wandered around for a while to see some booths before people got in. The first booth I visited is GSC booth which still covered in the blanket yet, though all the displayed figures are already placed so I could take picture of those before hand. Just when I hadn't even reach half of the hall, people already came in so I had to go back to Figmania booth to stand-by there. 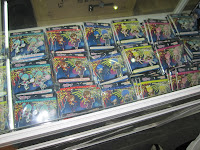 Oh by the way, there's nothing really new about figures displayed on that event. The only thing new I notice was the box of Nendoroid Sakura Miku which at that time hasn't been show anywhere yet. Ditto with exclusive merchandise/figure sold, nothing really exclusive except Vocaloid Summer Strap which sold for public for the first time here on AFA ID. I myself bought Megurine Luka despite I'm not really fan of Vocaloid; but it was good decision as on the second day began all of the straps were already sold except for Meiko. I was tempted to buy moekana and Figma BRS TV Anime Version but then I decide not to, and I kinda regret not buying the later since it was sold out on the first day. Yeah, those who thought most Indonesian otakus only like freebies and won't buy much were absolutely wrong, turned out our buying power was off the chart XD 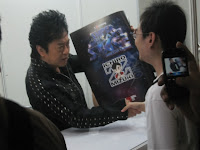 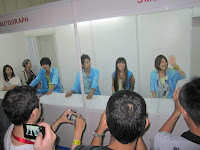 Tired and bored watching Figmania booth after awhile, I wander around but holy crap there was people everywhere. It's really, really crowded there. Not only inside the exhibition hall, but on the line to buy the ticket as well. I heard from someone he had to get in line for about 4 hours! Not wandering too much though since I had to wait for my other friend who brought my Anisong ticket. Once I met him, he told he got the lucky draw ticket and won the chance to meet bless4 but changed it to Aniki with other people instead. Since I only bought standing ticket, I didn't get the lucky draw to meet and get the artist's sign though I could still go to the autograph booth to see those artists really close and took their picture like I did with 7!!, Aniki, and bless4. 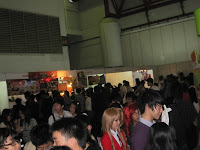 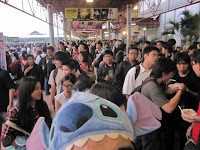 In the meantime while waiting those artist came to the autograph booth, I came to the stage hall to see they made appearance and introduce themselves; mainly for bless4 though. It was really fun to see most of those artists greeted the crowd using Bahasa, even AKINO replaced the famous "aishiteruu" lyric from Sousei no Aquarion to "kami cinta kalian" (t/l: Bahasa for "we love you). After went back to the exhibition hall, I waited in the front of the autograph booth again to wait for bless4. I already covered this part of the story on other entry so I'll just skip it. By the time bless4 finished their autograph signing, I was very hungry so I went to food booth to bought hot dog, which the line was very long too, I had to wait about 15-20 minutes until I got my food. After that I found Razor Ramon Hard Gay cosplayer, and since I'm big fan of HG hilarity, I took picture with him, out of all cosplayers XD 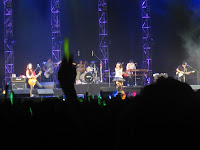 Once it's about 6 PM, I went outside exhibition hall to reach stage hall because Anisong will be started. The line was already crazy, as seen on the picture. I was the one wearing Stitch hat, by the way; I wore that Stitch hat in these 2 days, haha. Once inside, it was quite spacious on the contrary, at least for the standing part. I thought I'm going to be squished but I could sat in the meantime and my friend could even play his PSVita, lol. Since I only came for Aniki and bless4, after bless4 finished their performance (they had the third turn) I went back home with my friend, missing most of Lisa's performance. 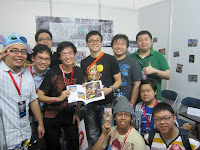 Second day I spent mostly to stand-by on Figmania booth more than the first day. But on the second day Danny Choo came to our booth so we took the chance to asked him to take photo with all present members and then sign my, err... our Ayase banner which already signed by Aki Takanori on the preparation day. 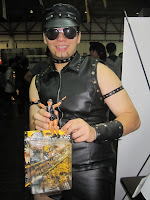 After that I wandered around to get GSC's exclusive fan. Interesting story from me about this fan, I had three fans but lost 2 of them: On the preparation day I got one but my mischief friend said to me that it wasn't for grabbed so I put mine back but turned out it was given for us who were invited by Aki Takanori; the first day I got one again and immediately put it along with my belongings on Figmania booth but I think someone took it since it lost; and finally on the second day I got another one by showing a receipt that I bought merchandise from GSC booth (the Luka strap) since on the second day only those who bought items from GSC booth could get the fan. So yeah after got my third fan, I put my name on it and after that gave it to my friend so he could ask Danny Choo to sign it for me. Once he gave it back to me, I realized it was different fan since my name wasn't on it, oh well I got Danny sign so it's still win for me, ahaha. 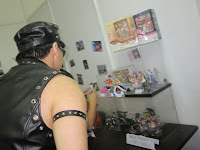 Another interesting happened on the second day. Me along with a Figmania comrade took the HG cosplayer to our booth so we could took photo together; but not all members "brave" enough to take picture with HG so only handful of us did. But I sure remember to took picture of the cosplayer with a HG figure I brought and displayed on Figmania booth. And you know, what are the chances, turned out this HG cosplayer is also a Figma collector! Well, he was according to him since it's been long time after he bought his last Figma. And after the event ended, when I went online and check Figmania group on Facebook, that HG has joined the group XD 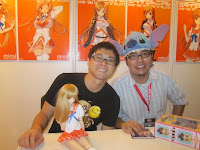 I also took picture of Nendonesia and SHFiguarts Indonesia booth on Figmania side. I'm also member there too, by the way, haha. I also took pictures with SHFiguarts Indonesia members there. And after that I practically just killed time until AFAID ended. My friend then informed there was Nendoroid Nee-san (which I just reviewed hours ago) sold at pre-order price so I rushed to the booth he mentioned. I must say that the poison comes from figure is stronger when you see and hold the figure with your own eyes and hands rather than see the pictures on your screen, since I bought Nee-san not long after that, haha. But I didn't regret it since Nee-san was great Nendoroid and I could ask Danny Choo to sign it for me, making my Nee-san more exclusive than it already is. I also took picture together with Danny, still wearing the Stitch hat, haha. 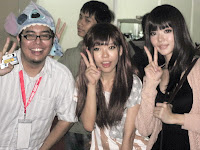 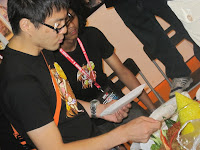 Other interesting story was we were closing and preparing to go home. Two maids from Moe Moe Kyun Cafe were also going home and finished changing. When they were walking in front of our and SHFiguarts Indonesia booth, SHFIndonesia members were asking them to take picture together and knowing that I didn't miss my chance to take photo with them too, haha. Little bit unfortunately my friend took blurry picture so I had to retouch it so it looks little bit better, lol. But well, I could take picture with both of them (plus 1 guy photobombing, though =A=;) without having to pay like when they were on the Cafe so I won't complain, haha. It was also very interesting when Danny Choo crew prepared Tumpeng Rice for Danny. FYI it was one of many Indonesian traditional culture; where we would split the Tumpeng Rice for celebration; usually it was the man/woman of the time to do the first split and later everyone could eat the rest of the rice. 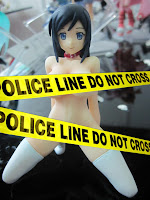 I didn't bring lot of my Figma to be displayed so I finished preparing earlier. I took the rest of my time to head swap my Ayase with other Figmas I didn't have. Well that's the beauty of offline gathering, you can played with other figures you didn't have, as long as the owner lets you to, obviously, lol. What I did is using Ayase head to my friend's Daiki cast-offable Daiki figures! Damn Ayase looks really delicious; but since I'm stingy, I'll just share one picture, and censored one for that matter XP And yeah, we of course couldn't display these Daiki figures since those are too explicit.

The last highlight was when Go Suzuki, sales from GSC came into our booth and Nendonesia booth to propose us a cooperation with GSC and Multi, GSC's official distributor on Indonesia. We then took photo together with Go Suzuki. I kinda disappointed I haven't taken picture together with Aki Takanori since he went out early on the second day. I was planning to ask his sign for my Nee-san instead, but oh well. I hope on the next AFA on Indonesia, he could come again and along with Max Watanabe as well :3 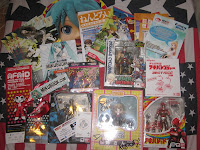 Well I guess that's all for this entry. AFA ID was great for me. Sure it could've been better, but for what I heard many was pessimistic AFA ID 2012 as the first national-scaled anime event on Indonesia could be succeed, no one predicted it'd be such a hit and crowded. But on the bright side, after seeing Indonesian otaku power, even Danny Choo said that AFA ID 2013 is inevitable and it will be bigger since he and more people now what Indonesian otaku are capable of, haha. As for me, these are the items I got from throughout 2 days. I've already covered all of the figures on my review, with the exception of SHF Kamen Rider Meteor which I'll do tomorrow, so stay tune :D 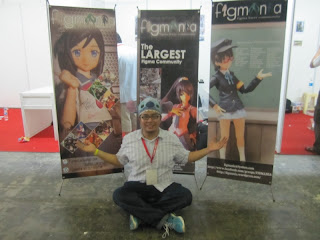