It's been more than 2 weeks so it's very late but I still want to share my experience from Anime Festival Asia Indonesia 2012 (I'll call it AFA-ID from this point for the sake of convenience), but on this entry I'll cover the reason why I spent extra money to buy ticket even though I have an Exhibitor pass, bless4!

bless4 is the singer group who anime fans will probably know from the legendary "Sousei no Aquarion" song, the first opening song from the anime who has same title. They also sang most of the songs from Aquarion EVOL, the sequel of the said anime. For more informations of the group, you can just Google it or check it on their Wikipedia entry. On the AFA-ID, they were one of the performers who announced later and just like I said, once they had confirmed to perform on the event, I instantly contact my friend to order me a ticket so I didn't have to wait for another 12,000 years to see their performance! 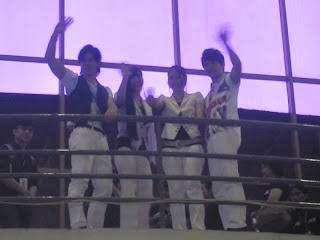 Before I cover their performance on the Super Anisong stage, let me cover their appearances on the exhibition and stage hall. The first time I saw them with my own eyes was on the first day of the event, when their pictures were taken for official coverage on the tribune above the exhibition stage. They were kind enough to looked down and wave hand to those who saw them in the middle of it, making two fan girls behind me scream like crazy. By the way that was my first time to hear squeeing fan girls in my life, ahaha. 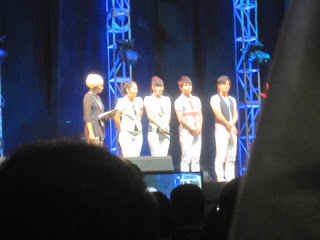 Moving on, all of the performers on the day one made their appearance on the stage so when the scheduled time almost there, I rushed to the stage to see bless4 and Ichiro "Aniki" Mizuki. When it was their turn, they introduced themselves using Bahasa, surprising their fans including me. And it got better when AKINO sang the famous "aishiteruuu" part of "Sousei no Aquarion" with Bahasa, replacing it with "aku cinta kalian" (t/l: (I) love you). They said they were really excited to perform in Indonesia as it was their first time to perform outside Japan. 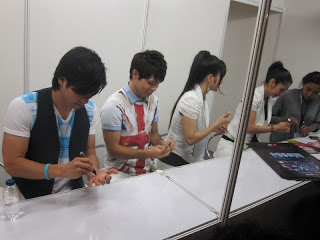 And then it's time to the signing part. Oh yes, all the visitors who bought VIP ticket will automatically joined lucky draw campaign with chance to get signatured poster of artist of their choice and handed directly from the artist as the prize. Unfortunately yours truly only bought Standing ticket so of course I didn't get the chance to win that, though that didn't stop me to came to the booth to saw bless4 really close with my own eyes, lol. By the way, on both day I wore a Stitch hat just for the lulz but then I remembered bless4 sang the opening song of Stitch tv anime, I really glad I wore it because when bless4 walked into the booth, AKASHI, the oldest of the sibling, noticed the hat and smiled at me and said, "Ah, hey Stitch" XD And once they all sat on the booth to sign the posters and meet the lucky bastards who get it, AIKI and KANASA also noticed my Stitch hat and smiled <3 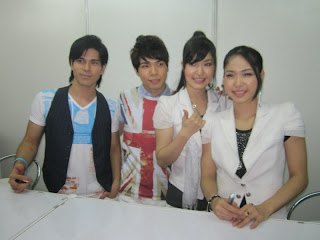 When it was Aniki, his manager was so strict we couldn't take picture of him but fortunately that wasn't the case for bless4 as they were really friendly, even they posed after finished signing all the posters so all the fans, including me, could take their pictures. Since she's the one getting the most attention time over time, it was normal to gaga over AKINO, but when saw her from really close, KANASA was really cute herself <3 Even though I couldn't get their signatures or even shake their hands, but just to be able to saw them really close was more than enough for me; beside I recorded the time when KANASA noticed my Stitch hat XD 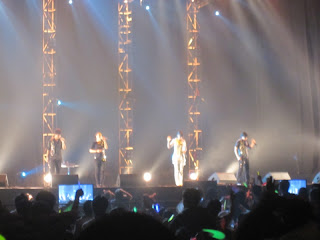 And now their performance on the Super Anisong Stage! bless4 was the third artist to perform on that day, out of 4 scheduled artists. When the intro of "Sousei no Aquarion" played, all the spectators yelled, it was the greatest and loudest reaction so far that time since the concert began! As expected from the song, I guess, it was so legendary even those who haven't watched the anime (less likely now since EVOL boosted the original's popularity) know the song and sang along, especially on "aishiteruuu" part. It was really beautiful. Oh by the way I recorded almost all their performance even though it's forbidden to do so, but of course I won't share my videos for two reason: I record for my own sake and because I sang along very loud so my horrible voice was also recorded XD

The second song they sang immediately after the first ended was "Go Tight", the second opening song of Sousei no Aquarion. And again, as expected, that time the crowd wasn't as noisy since the song wasn't as popular, though it's different for me. After it ended, bless4 said hi to the crowd and introduced themselves, again with Bahasa! They messed up though since they didn't say it well, understandable since it's hard to speak language you don't familiar with. Their exact line was, "Halo ganteng! Halo cantik! Kami adalah kakak-beradik dan kami adalah bless4!" (t/l: "Hello handsome! Hello beautiful! We are siblings and we are bless4!"); and after that they introduced themselves one by one. Once it was AKINO's turn, just like Amata on EVOL I screamed "AKINO-saaaaaaaaaaan!!!", though it's very likely she didn't hear me XD

On that part they also shared their experiences on Indonesia. Like how they ride bajaj, traditional Indonesian public transportation, and amazed because it was unique as passengers had to negotiate the fee; and by the way they told all of us that they probably paid too much after they asked the cheapest fee for bajaj. They also said that they love Indonesian foods like soto and satay, especially AIKI who loves the peanut butter sauce of satay. AKINO said that Indonesian people were very kind and welcoming, and to quote AKASHI, "Very cantik", lol. 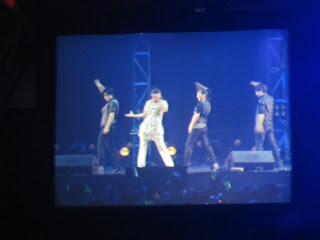 After that they sang"Genesis of Aquarion", the accoustic version of "Sousei no Aquarion" with English lyrics. The great moment was when AKINO changed the "aishiteruu" lyric to "kami cinta kalian" (t/l: (we) love you), making the crowd's going crazy. After the song, they requested to raise our hands and spin it three times as the lyric "round and around and around" because they would sang their own song, "Round and Around". After the original song, they greeted the crowd again; they amazed many of us knew the "Sousei no Aquarion" song and even sang along so they requested us to sing the verse by ourselves (Ichimannen to nisennen mae kara aishiteru). Then they asked if we have watched EVOL because they were going to sang the duet song from that series, the first ending song "Gekkou Symphonia". Before they sang, AIKI said that for him it was kinda weird to sing a love duet song with his own big sister, ahaha. And by the way, I could hear some of the people around me saying, "Incest!!", ROFL. 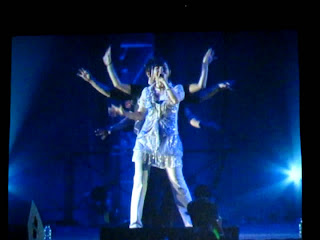 After that they talked billingually as KANASA spoke Japanese and AKASHI translated her to English. They promoted their blog, Facebook, and Twitter accounts. They then sang "Paradoxycal Zoo", the second opening of Aquarion EVOL. It was the first time I saw their live performance singing this song as I haven't seen it on Youtube or Nico yet, and the dance choreograph was just as great as their other songs. Unfortunately in the middle of this song my camera battery went low so I had to stop recording to change the battery, FFUUUU!!!

After this song they sang another original song which I forgot the title was. Then KANASA said, "We would love to come back again next year" which make the crowds went crazy once again. They then announced that they will sing the last song and the stage went black for awhile. The intro for "Kimi no Shinwa ~ Aquarion Dai Ni Shou" could be heard and they, along with the crowds sang, "Osore! Living your life don't give up now keep moving on, kimi wo dakishimeru nandomo nandomo nandomo!!!". Again, it was really beautiful, more when they reach the riff "Zenryoku de mikansei kimi no tonari de!!", I felt like I want to cry to be able to see they performed live.

Unfortunately they only sang the short version of it, the TV lyrics with additional the last verse, and AKINO closed bless4's performance on AFAID immediately saying, "Thank you very much, we love you!! Arigatou gozaimashita!!" and the siblings gave the crowds salute and disappeared into backstage despite we requested for encore :(


Well that's my coverage of bless4 on AFA ID, I hope you guys enjoy it. Don't ask me to upload the videos as I won't upload it even if someone begs me to. See you on next post, and I promise to cover my experience on AFA ID outside bless4 later :3