How Should You Pose Your Figure? 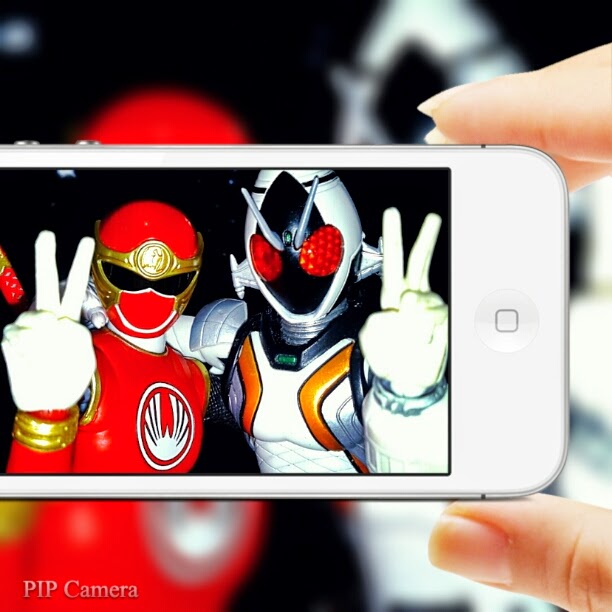 Whoa, it's been awhile yet again since the last time I post here, about half a year, huh? The bad news is I have stopped doing FiguReview segment. With my current daily activities, I hardly find time to do figure photography, let alone for complete photo session, editing, and writing a review; so nowadays I only do some shots and then post it on my Instagram account (@bakanki if you haven't followed it yet). But I find it more fun that way, rather than take a lot of standard shots, fewer but more interesting, themed shot is less time consuming and let's just face it, there's already tons of more talented guys doing more thorough review than I did, with better picture quality on top of that ^^;

But today, I would like to share an article to give you some ideas and inspirations to pose your figures by categorizing some themes. Nowadays, action figures have better, sturdy, and more dynamic joint engineering, accessories, and gimmicks so it's going to be a waste when we're not fully use all of those to make our figures looks more awesome and alive, isn't it? So, for you who is currently wondering what pose should you do to your figure for display, and later for photography, keep reading because I'm moving to theme #1 already~

Even though it's the most basic theme, but some characters do have a bit difficult signature pose to reenact because the joints of the figures can't perfectly execute the pose. 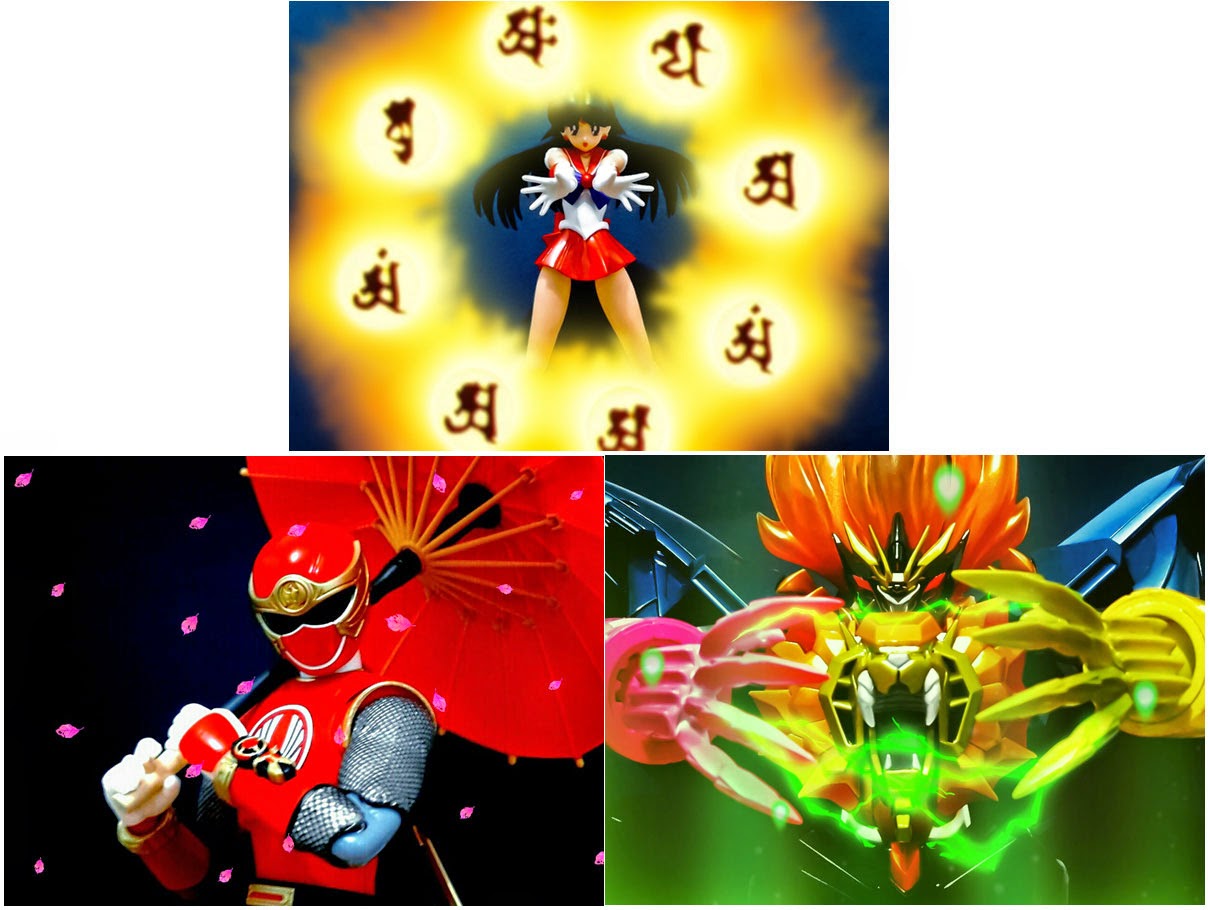 2. Original Pose(s)
Not all the figures you buy you're familiar with the character, am I correct? Sometimes you either buy the figures because you like the design, or the figures came with interesting accessories you want to use with another/your favorite figures, so you're not familiar with the character and his/her signature pose. At that time, we usually came up with your own original pose, and/or use the accessories not in the way "it should".

This can also be applied for characters that didn't have specific/signature pose, most of the time it's characters from daily lives-themed shows. 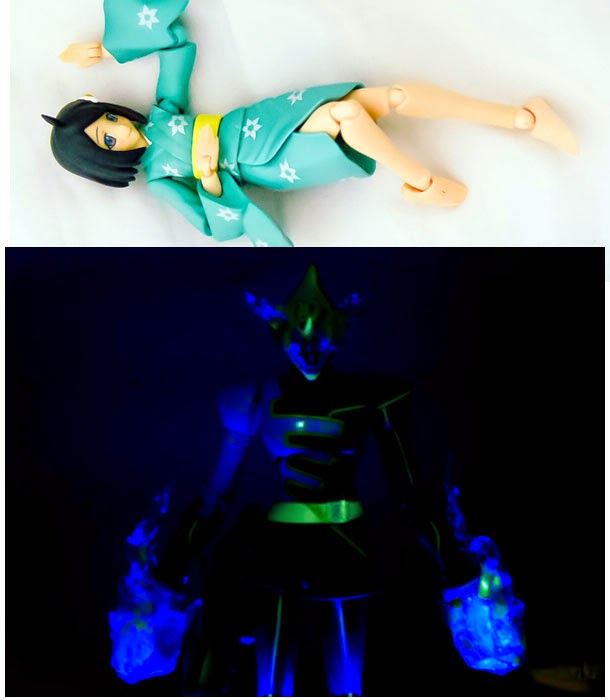 3. Reenactment of Memorable Scene(s)
This is almost the same with #1, for the fans of the show they will have some favorite, epic memorable scenes and they can reenact it with the figures. Usually though, you need more than one figure but sometimes the figure came out with accessories you could use to reenact that solo scene(s).

It comes without said that posing more than one figure is more difficult, but the result will be greater too. For battle scene, you could use some effect parts to add more impact and/or use photo editor software/apps when you took picture of it for better result. 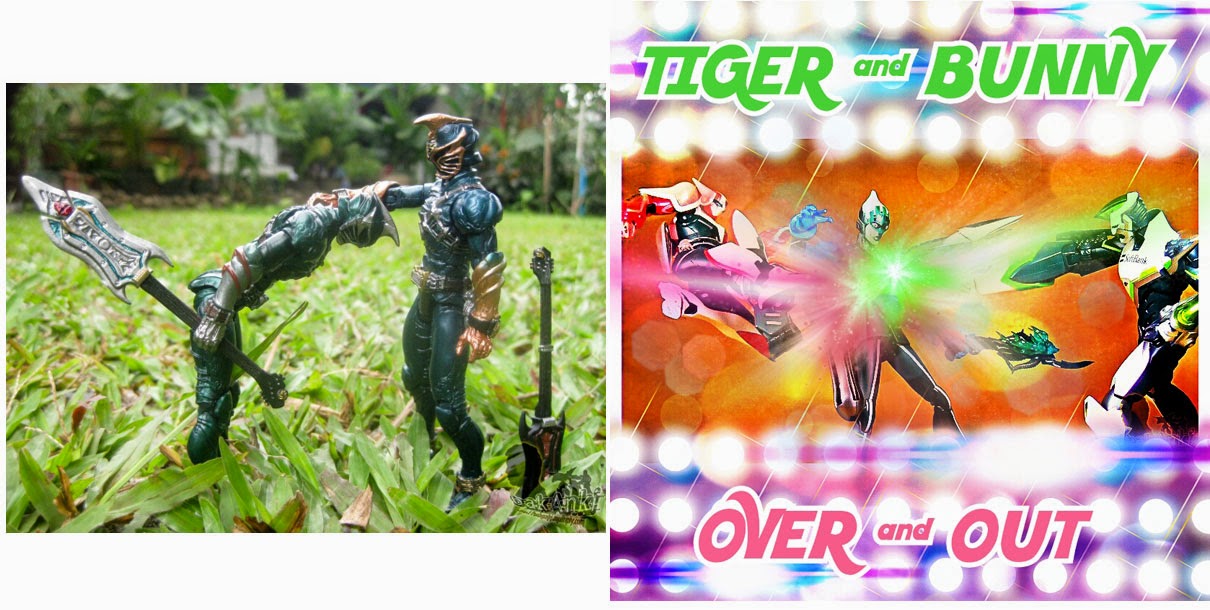 4. Out-of-Character Pose
Bored with the usual poses, then from this point onward let's think outside the box, or just crush the box while we're at it. One of the pose type I usually do is breaking the image of the character, making them do out-of-character pose. Make the heroic heroes to do wacky pose, the scary villains with silly pose, cute girls abuse others, and so on. Your imagination is the limit! Just remember that when you took picture of it and post in on the internet, some hardcore fans will probably bash you <-- based on personal experience, lel. 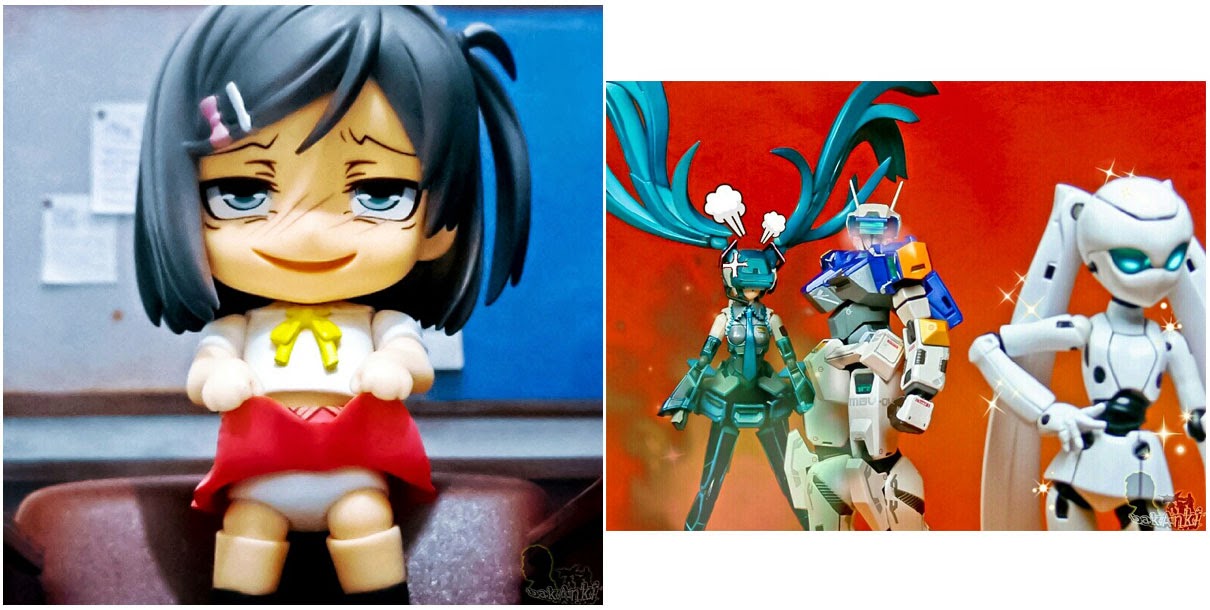 5. Everyday Pose
You may think, "Meh, boring. Isn't this just the same with #2 anyway?" at first.

Well my friend, you can't be more wrong. If it's the characters that came from slice-of-life series that maybe the case, but when you make, say... monster or superheroes do those normal, routine everyday poses the result can make the sides of those who saw it went to space. In fact, many of my post that got a lot of hits (on Tumblr, My Figure Collection, etc) are those of tokusatsu heroes doing normal, everyday pose. Eating, cleaning, taking a bath, texting, playing music, and so on. Those pose you thought boring at first can become the bomb when you do it with particular figures. But you do need separately sold in-scale miniatures though, although some figures do come with it. 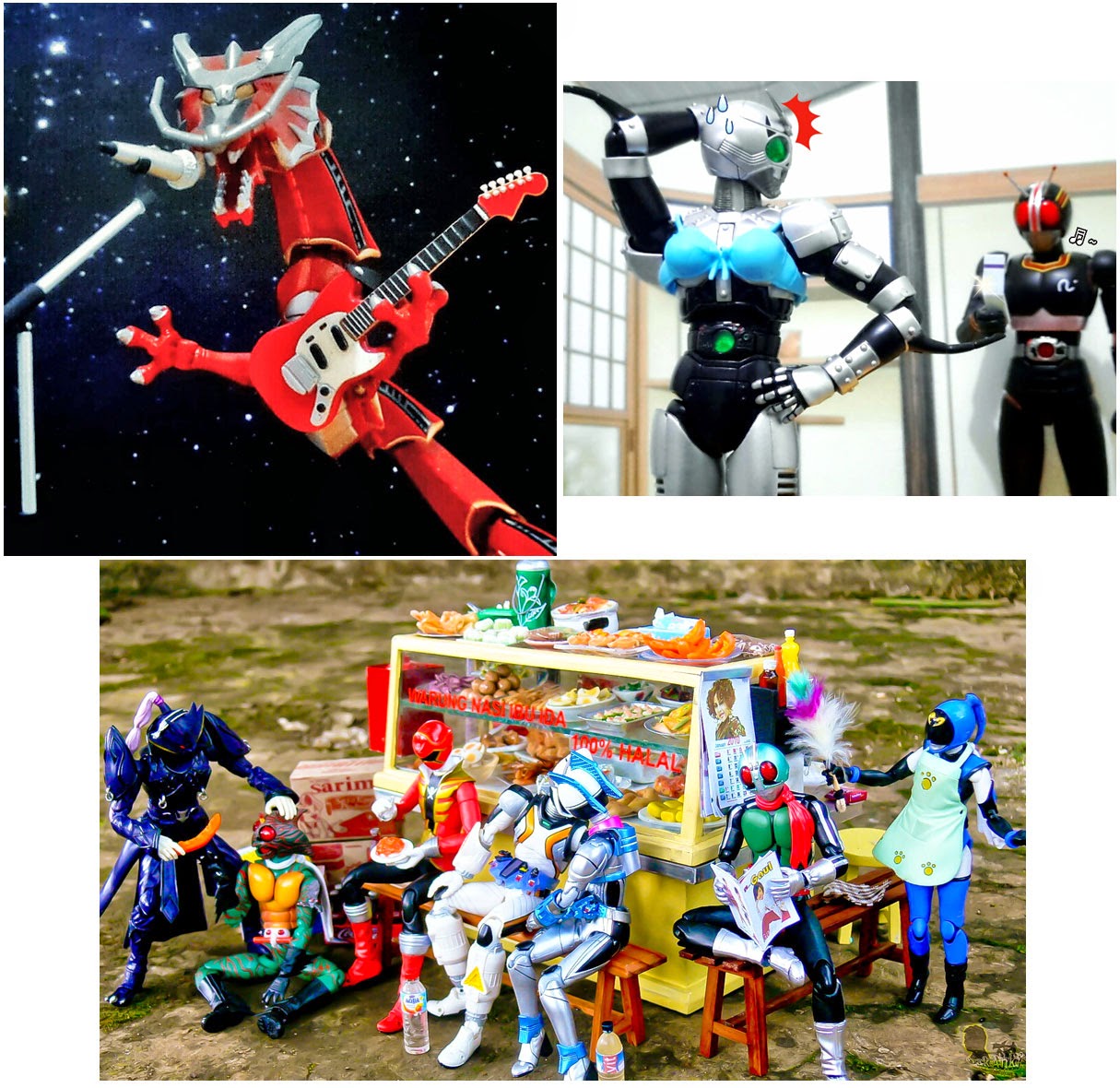 6. Parody
Do you find some similarity of the figures you have with certain tv shows, games, movies, real-life person, or others? Make parody of it!

Editing skill with certain software on PC may come in handy but not necessary, since nowadays you can just install editing apps on your smart phone for simpler editing. 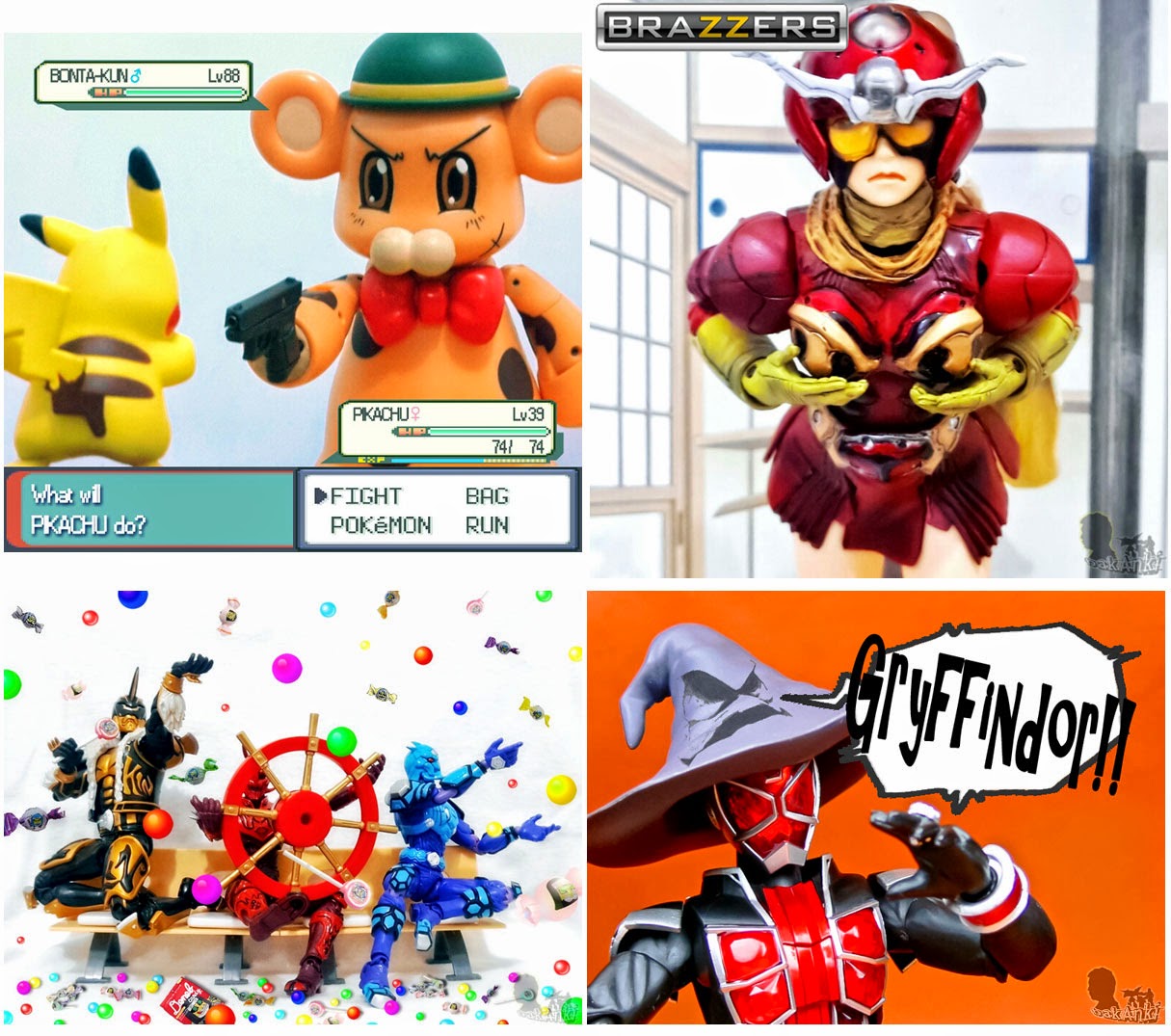 7. Part-swapping or Kit-bashing
The figure line with part-swapping as its main gimmick is Nendoroid, you can easily swap most parts, especially the face part, to create your own original character, or just make your favorite character looks fresh with different outfit. But some other figure lines are able to be part-swapped or kit-bashed even if it's from different figure lines and/or manufacturers, for example for 1/12 scale figures you can mashed up SHFiguarts, Revoltechs, and/or figma part to each other.

Be careful though when you decide to remove parts, because some parts aren't suppose to be removed and you may break your figure doing it <-- again, based on personal experience ;_; 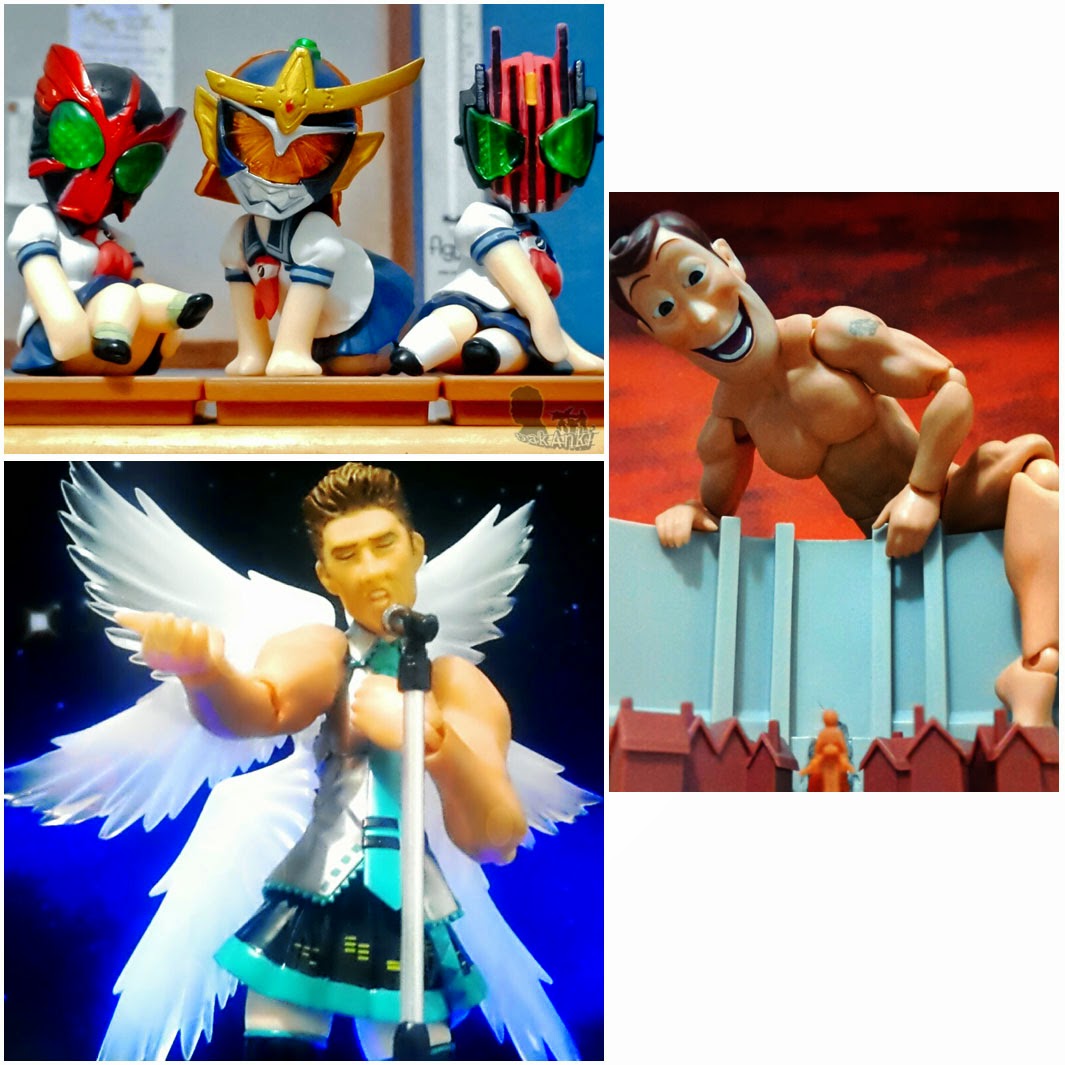 8. Crossover
Another fun thing collecting figure is you can do the impossible crossover of your dream. Ever thought of Batman meeting Kamen Rider Kiva, Pacific Rim's Gipsy Danger confronts Godzilla, Pretty Cure team-up with Sailor Moon, and so on? Make it comes true with your figures, camera, and imagination! 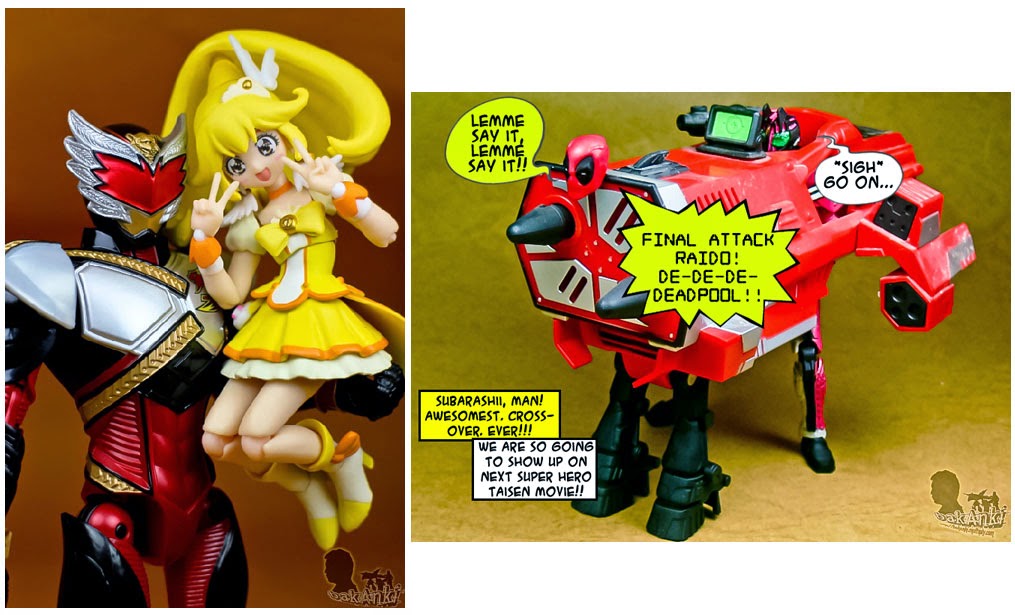 9. OTP
This theme can be combined with #5, but since I like this theme I decide to make it stand on its own.

Some show sometime have characters paired romantically. On some cases they do end up together ever after, but there's also case where they don't really have conclusion (coughharemanimecough) or even the pair you support don't end up together at all. That hole can be filled with your figures (this sounds kinda wrong, huh?) because you're free to make your own OTP by posing your figures with romantic poses.

10. Interaction With Real-Life Things
This theme is one of the best way to make your figures look alive, have them interact with real life things. It can be food, tv, your pet, or even yourself.

11. Meme/Reaction Images
Bored with all existed meme/reaction images to post on online boards, Facebook, or other sites? Make something new or remake existing ones with your figures and surprise everyone with it. Some figures have hilarious, inappropriate face part that ironically appropriate to post online. 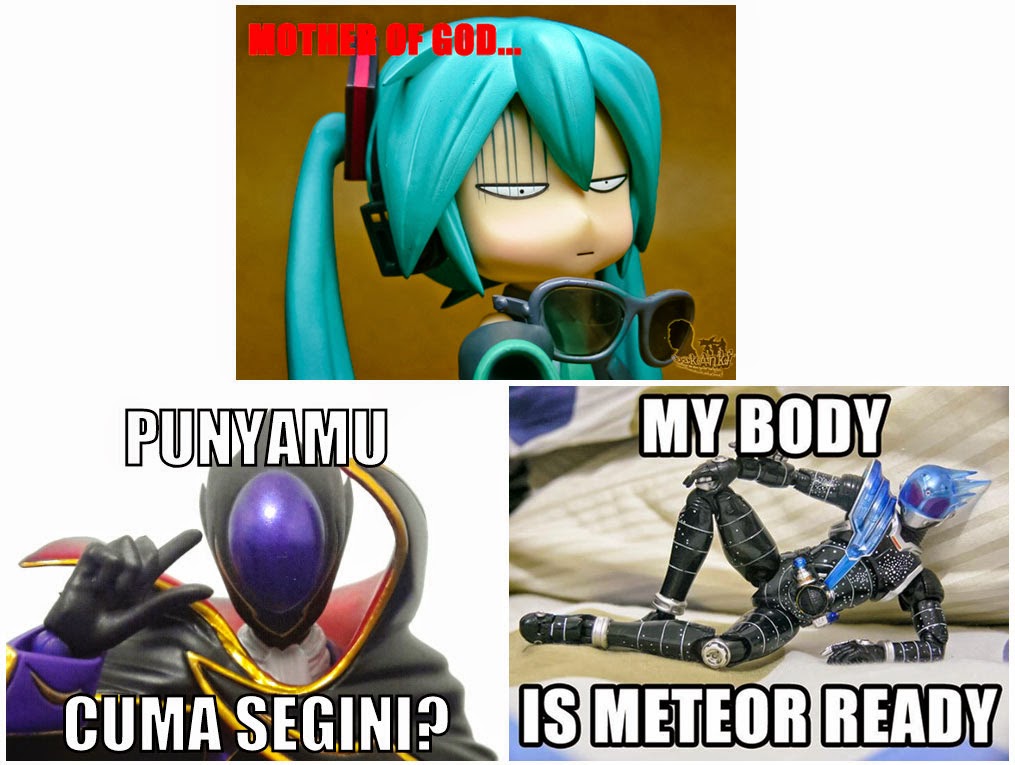 12. Make a Comic
Have an idea for comic or 4koma but you can't draw? Once again the answer is: do it with your figures! There's many free or paid apps that can provide you with many comic templates, including text balloons and expression icons so you can make your own comic easily with your phone. Let your imagination go wild! 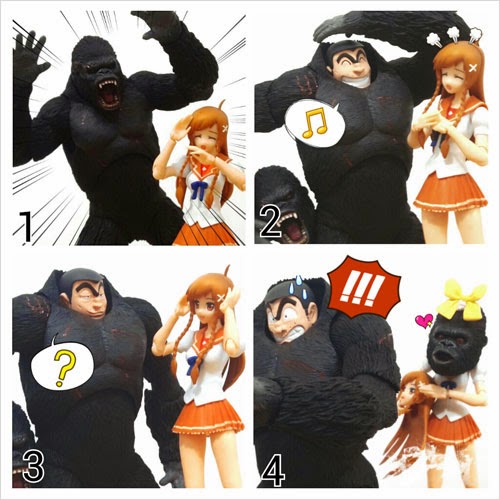 13. Augmented-Reality
This is a theme that came up recently after I installed "Mikuture" app. I find it really fun to combine figure photography with AR/Augmented Reality, even though it does take quite time to make it looks good. Does anyone know more AR apps like this for Android, do let me know by dropping comment below, won't you. 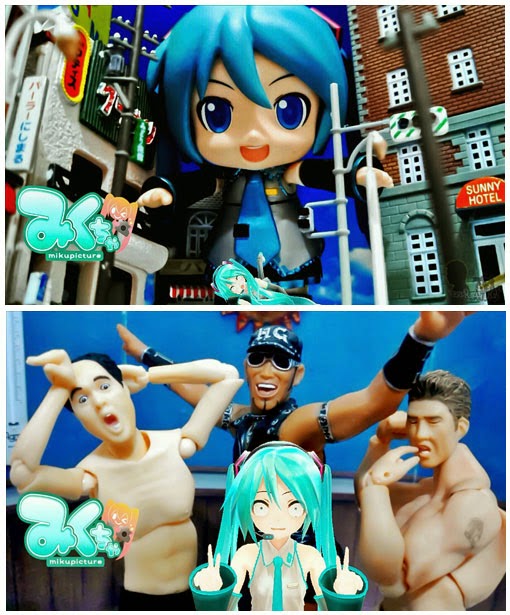