Almost a month since my last post, and I just want to let whoever read this that I'm still alive, haha. Real life stuff isn't really holding me back to make time to post something, but it just I don't have mood to do photo session of my new figures and write review. I still have two sets of Kamen Rider Fourze and Wizard candy toys and SHFiguarts Shinken Red waiting me to unbox them, and then another Wizard candy toy and SHFiguarts Wizard Flame Style will come soon on my posession, but I don't know when I'll be in mood to do my stuffs, haha. Other than that, look what I have here X333 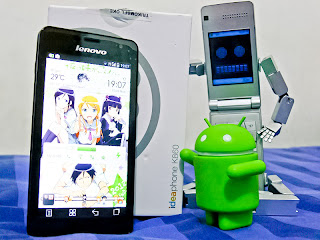 After my Blackberry busted weeks ago, I had to use my 7-8 years old Sony Ericsson Z610i back but week later I bought my very first Android phone in form of Lenovo K860, w00t! And with that, I finally can register on Instagram and share my stuffs there. So, if you want you can follow me on @bakanki there, even though for time being I'll only post really old stuffs and occasionally random shot here and there :3


Lastly, Photo Kano related, we get full-colored artwork for all the 6 main heroines and also Misumi Tomoe! Look at this. It's mixed feeling for me, I like how most of them look, I especially like Mai which has.... more cat-alike face (and pose XD), but I don't really like how Rina look here :\ The anime by the way, will air starting on April 4th on TBS on 25:55, replacing Haganai Next time slot. With the upcoming anime event on March 17th (a day after my birthday, wish I could go there XD), I think it's safe to assume we will get the proper PV that day.

Now I will have to prepare myself and my collection because I will bring some for display tomorrow, as there will be local toys fair on Jakarta, The Jakarta 9th Toys & Comic Fair 2013. If you're live or happen around there tomorrow and Monday, be sure to go there =D Well then, that's all for today, see you later on next post! ^o^
by: bakAnki